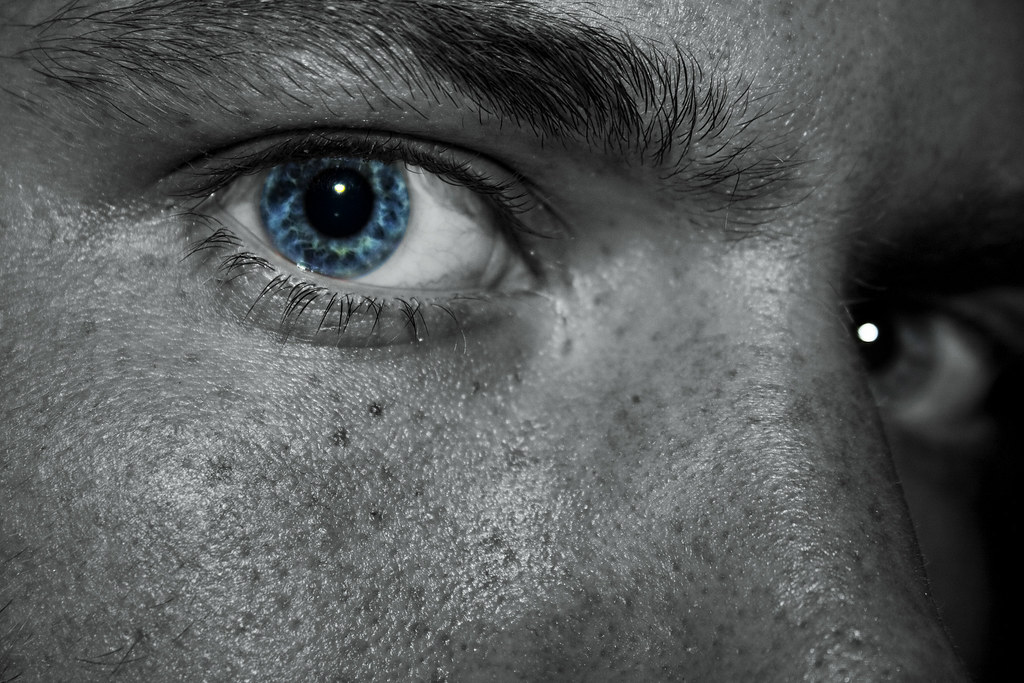 “Blue eyes” by butler.corey is licensed under CC BY 2.0

As the sun shines through the window of the small-town home in Austin, Nevada, Jared’s mom wakes him up for school. His life is normal. He goes to school every weekday, hangs out with friends on the weekends, and even plays sports at his high school. What he does not know is that soon he will come to realize that life in this town or even this world is not what it seems. Hearing the knock on the door Jared jumps out of bed in nothing but his underwear realizing he slept past his alarms and is going to be late. He rushes to gather his clothes, book bag, and car keys.

“Jared honey you are going to be late for school,” his mom yells from the other side of the door.

“Yes, I know mom, I see the time!” he quickly yells back.

Jared quickly runs out the door to his car and makes his way to pick up his friends Ashley and Michael. A couple hours later when school ends Jared sees a strange note left on his car windshield under his wiper. All it reads is “RUN”. Thinking it is some practical joke he tosses it away and thinks nothing of it. While he is dropping Ashley and Michael off at home, he asks them out of pure curiosity if either of them had left that not on his car windshield. Both Ashley and Michael say no. Jared becomes confused because he is not really friends with anyone else. So, who left that note for him? His entire car ride home that note bothers him. Zoning out Jared finally arrives home and as Jared begins to walk to his front door, the next thing he sees is black. Sometime later he awakens strapped to a chair and a bag over his head.

“You need to listen!” a strange voice in the distance says.

“Stop, nothing is going to hear you out here,” the voice says.

“Thing? What are you even talking about, please let me go,” Jared begs.

The bag is pulled off Jared’s head. He looks around but his vision is blurry for a second. Trying to process what is going on, his mind is blank until he sees a man clear as day progressively moving towards him.

“You’re…You’re Tony J!” he says with a stutter.

“You’re a criminal, a murderer and thief!” Jared says back.

“Killing robots isn’t what I would call murder,” Tony tells him.

“That’s the thing kid, you are real. But not them. Everyone you know is a machine, humans are a dying breed and you’re that last one I have found.” Tony explains.

“Wow, the news didn’t say you were a crazy person either,” Jared says with sarcasm.

“Listen! You really can’t see it can you. How perfect these things are? How none of them have acne or scars or even a freckle? How they go to sleep and wake up at the exact same time day after day. Their pupils don’t dilate in the sun, you can barely see them breathe. Have you ever seen any of them swim? Each one of these things is programmed to do one thing. Why do you think each person in your school has one special talent and nothing else? Why did your chemistry teacher freeze up and look as if he was motionless when you asked him a math question? All these things, all of them show you something is not right!” He says with anger.

“Please just let me go man, I won’t tell anyone I saw you. I won’t, I promise just don’t hurt me” Jared says.

“I’m not going to hurt you, but you’ll see and then you’ll know the truth,” he remarks.

Tony places the bag over Jared’s head yet again and drops him off at his house. When Jared wakes up in his own bed he starts to freak out. He runs to his phone to call the police but is hesitant to dial. He starts to think about what Tony had said about the people around him. Some things he knew to be true, but others he just had not noticed. That’s when he sees a piece of paper across the room that was not there before lying on his desk with Tony’s number written on it. It reads “for when you know the truth and want to help me stop them – Tony”. Jared who is now very confused sits on his bed thinking and staring at his ceiling. Could what Tony said be true? Or just the thoughts of a crazy person? At this moment the hair on the back of Jared’s neck stood up. The sounds from outside are repeating.

“What the hell is happening!” he says to himself.

A couple of seconds later those sounds happen, repeating every minute. Hearing this Jared stumbles backwards onto the floor. As he sits in his room up against the wall, he gets an idea. Jared decides that with this new information that it is a good idea to test out some of Tony’s theories. As the sun rises on a new day, Jared wakes a couple minutes before his alarm to greet his mother in the kitchen. The first theory he decides to test is to see if his mother has a reaction to sunlight. He began to notice that every time he opens the blinds his mom shows no reaction to the blinding morning light. Thinking that she has just been awake for a while he moved closer to her. Jared uses grabbing milk from the refrigerator as an excuse to stand directly next to his mom. A good two minutes go by before she starts to question what he is doing. He saw that his mother that whole time took no breaths in or out. Freaked out by this he runs out the door and goes to pick his friends up for school. While in the car Jared tells them that he thinks his mom might be a robot. Without hesitation Michael dismisses his claim and assures Jared that it just is not possible. He continues to try and explain to Michael that he is right. He goes on to explain that he was kidnapped, and the guy has opened his eyes to what is really going on, and that he is not in the dark anymore.

“By whom?” Ashley said. “Did you call the police?”

“That wanted fugitive Tony,” Jared explained. “No, I cannot call the police because I think he is telling the truth.”

The next thing Jared knew his car shut down. Everything from the lights inside to the engine stopped working. Jared controls the car to the side of the road and turns to see if his friends are okay. What he turns and sees is something he wishes he never saw. Both Ashley and Michaels eyes turn bright blue with blank expressions on their faces.

“Our asset has been compromised!” Both Ashley and Michael said in sync.

Jared immediately jumps out of the car and starts running for his life. He does not know it yet, but he is now on the run. Every “person” he runs into has blue eyes and is after him. It seems as if his entire town now knew he found out the truth. Legs burning and sweat running down his face Jared can barely comprehend what is happening and refuses to believe that any of this is real. He slowly comes to realize that his whole life is a lie, everyone and everything he thought he knew is gone, it does not matter anymore. His only thoughts now are to not trust anyone or anything for that matter. He eventually gets to a payphone where he calls the number Tony gave him.

“So, you found out the truth,” Tony says over the phone.

“They are all after me, everyone I ever knew, their eyes turned blue!” a panting Jared shouts.

“Where are you, I will come pick you up!” Tony replies.

“I am glad you came around; I needed a second person to finally shut these things down” Tony tells him.

“What do you mean you need a second person?” Jared asks.

“The core of the robots is in the pentagon. I have noticed that every time I kill one of them, most have mechanical glitches. And a huge use of power every time pulses from that area. To get in, I need another pair of hands, someone needs to upload malware to the system to shut it down!” Tony explains.

“A virus, it will cause a system overload to happen and shut down the core causing all the robots on this planet to shut down with it,” Tony replies.

The next day they make their way to the pentagon. Standing outside Tony pulls out a USB stick with the words “Bye Bye Robots” written across it. The outside of the building is left unguarded. It looks to be a ghost town. They make a run towards the door and break through. Tony, who has been there before leads the both of them towards the core. Outside the door to the core stands all of Jared’s friends and family, urging him to reconsider and to come back to them. That is when Tony pulls out a machine gun and opens fire. No blood just sparks begin to fly and they attack. Tony throws Jared the stick and tells him to shut them down. As Jared looks back and sees Tony fall, with his last breath he says

“For the human race!”

Jared, with a tear in his eye, sees what used to be his friends and family uploads the virus to the core’s mainframe and all the robots around him fall to the floor. Computer screens all around the pentagon unlock from the AI’s control over all electronic systems. On the other side of the world humans who have survived and held a robot captive see it shut down and their electronics unlocked. Giving them access to the rest of the world finally knows that the AI’s control is over. They send a signal out with their location and a communication link which Jared sees. Jared, smiling, clicks the link.

This was chosen because it helped me figure out a reasonable way to shut down a computer. To make it seem more realistic even though it is for fiction.

This was chosen because it explains a way how robots can react and perform. I used it more of a reference for thought and not a main attribute in the story.