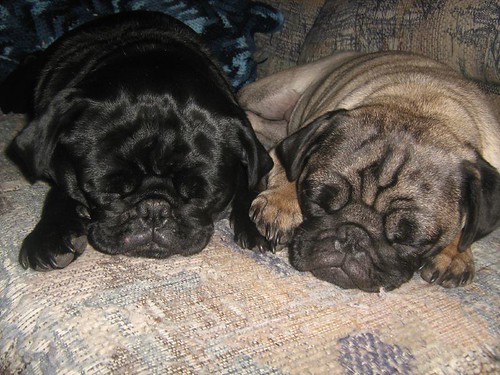 “Petunia & Peony” by sunsets_for_you is licensed under CC BY-SA 2.0

As Jas looked over to his brothers and sisters in the litter, he noticed they had begun exploring more than before. He had realized from very early on that adventure was always his preferred calling. Little did he know, his life would be full of it.

As the months went on, his siblings began dwindling. It was so bizarre; random people would periodically come to the house and take them away. And they were never to be seen again.  Soon, he was the only one left, and that lasted for a little while. He had been able to bond with his mother one on one for about six months until he went on a little trip of his own. One morning, he was loaded into a car, and taken to doggy heaven! Tons of other puppies were roaming around, others in an oasis behind metal bars. He couldn’t wait to join them.

The first night was kind of rough, he hadn’t gotten to know anyone yet, and he found out that he may be just a tad bit shy. But the second morning, that’s when it all happened. He met someone, and his name was Leorio! He found him to be a bit odd though, he couldn’t necessarily communicate efficiently with Leorio, well actually, he couldn’t communicate at all.

That night, Jas quickly realized that Leorio must’ve been a puppy when coming to the doggy oasis, as the people were teaching him to go outside with the other pups to use the bathroom. Confused, he looked over to Jas, and Jas led the way. Leorio walked with him out to the grass, the people not far behind, and Jas lifted his leg towards a tree and used the bathroom. Mimicking him, Leorio did the same. After successfully using the bathroom, the people cheered and gave both dogs a treat. Yummy, Jas thought.

A couple weeks passed, Leorio had become a master at using the bathroom, and Jas had been able to figure out a couple of things: bing meant yes, and le meant no. He was excited for this progress but knew that there was so much more to decipher to be able to talk with Leorio, something he longed to do. That afternoon, Leorio and Jas went outside for their one-hour play break. As they wandered around, Leorio glanced at a tree and said, “beep.  Okay, Jas thought, ‘beep’ must mean tree! Slowly but surely, he’s breaking down this barrier that was built up due to their language inconsistencies.

Looking over, Jas saw a new face, and a seemingly friendly one too! He pranced over to see what their name was.

Jas glanced towards Leorio, finding him wandering aimlessly around the fenced in area, Jas screamed, “Leorio” to get his attention. Hearing him, Leorio came running.

Quickly forgetting that Jas couldn’t understand what he was saying, Leorio began ranting on and on about something that must’ve just happened. Daisy’s ears perked; she was intrigued. And then something amazing happened, she responded to him! She knew the language; and Jas was so relieved. Maybe, he thought, she could be the middleman! And boy was he right, she was the perfect addition to this duo.

As more weeks passed, Jas became more aware of his language and began to break down the gist of what Leorio was trying to say. Daisy was a huge help when it came to this, as she was very patient with Jas and his slow progress, but always pushed him to keep trying if he didn’t get the word quite right.

Thinking, he responded, “Go outside?”

Daisy began rapidly jumping up and down, “You got it!”

The pure joy in her movements gave Jas the biggest smile, she was so proud of him.

After a long Jas and Leorio went back to their cages for the remainder of the evening. However, what they discovered shortly after that, would change the rest of their lives. Someone must’ve forgotten to completely latch Leorio’s cage closed, and he was able to nuzzle his way out. Of course, he had to break Jas free as well. And once both pups were free, they were gone. They’ve always wanted to explore what was beyond the fenced-in yard, and this was their opportunity, they knew that they had to take it.

When wandering the streets of Chicago at night, they found many stray pups, and huge structures – some of them looked like they were kissing the sky! Looking over at Leorio, Jas had noticed that Leorio was copying quite a few things that he was doing. Jas would walk around those horrifying grates in the pavement, and he would follow. It had almost seemed like Leorio had never really been out in the real world. Jas felt delighted that he had become somewhat of a role model for him to follow.

At the corner of Blanken Street Jas glanced over to his left and saw a doggy door in the side of a brick building. Intrigued, he motioned Leorio to follow, and they entered through the side of the building. Music was all that they heard when walking through the door, and it wasn’t just any kind, it was the ‘Pup Hits’ radio station! Immediately Leorio and Jas joined the circle of dogs that was dancing in the middle of the dance floor, fitting in seamlessly. And then they heard, “Stop!” A humongous pup came rushing over to greet the two that had just joined their dance party, asking for their names.

“I’m Jas”, Jas said nervously, “And this is Leorio”, he said pointing towards him. Leorio just slightly nodded and smiled at the dog staring at them.

“Does Leorio speak?” He questioned.

“Well, yes. But he speaks in a different language.”

The crowd erupted, “Now that’s what I like to hear!” the dog said.

Walking towards Leorio, he began speaking. And they hit it off! Next thing Jas knew, Leorio and Ben, that was the big dog’s name, were dancing together in the middle of the circle that had just formed. Jas, breathing a sigh of relief, was excited to see where this would take them.

As the night grew darker, the dogs started retreating to their tables, leaving the dance floor relatively open. There were about ten pups in total, three of them being Jas, Leorio, and Ben. Ben began explaining something and was jumping between English and Leorio’s language. From what he could gather, they had to go through some type of initiation to be able to stay within this club. Weird, Jas thought, but he had really begun to like this group of dogs. He felt like he truly fit in, and by the looks of it, Leorio felt the same way. They needed to pass this test.

Thirty minutes later, and it was show time. But this wasn’t necessarily a typical initiation, it was quite unique. The pups had to show off their dancing skills, however, Ben was the leader. They had to mimic his moves, and then be able to seamlessy recreate the dance. Jas had wondered if this had anything to do with what he had seen earlier with Leorio, and how he was copying his every step. Nonetheless, it was time to begin the dance.

The music began playing, and they saw Ben dance through the chorus of the song. He had shown Jas and Leorio the dance twice, before he turned to them and pointed. The chorus restarted for a third time, and Leorio immediately began dancing. Slow to start, Jas joined. And then, in the blink of an eye, the music shut off.

Clapping, Ben announced, “You both passed, Jas, you were a little shaky, but seemed to get the hold of it.” Leorio looked over to Jas, and Jas gave him two big thumbs up. They did it!

As the night went on, Ben had started asking some interesting questions.

Confused, Jas responded, “Well English, of course”. Not thinking much of it, Jas continued talking with some of the other pups.

“Wait, do you even know Leorio’s language?” Ben asked.

Turning to face Ben, Jas slowly shook his head side to side, indicating that he does not speak, or know, their language. Ben turned to the group that had formed behind him, looking absolutely appalled.

Oh no, is all Jas could think.

Ben called Leorio over and began speaking to him. Jas had noticed that Leorio was slowly getting very worked up. Moments later, he heard screaming. Leorio had turned red in the face due to his fit of rage.

“What is going on”, Jas asked, concerned for Leorio, and confused as to what just went down.

“Leorio got upset with me. I told him I didn’t want you in our club as you don’t know our language.”

Ben immediately snapped his head to look towards him, “What did you just say?”

Not aware that Ben was able to hear him, he responded with, “Oh, I was just repeating a phrase that Leorio had once taught me.”

“Leorio had explained that you were trying to learn his language, but I didn’t believe him. That’s why he got so upset, he knows that you’re trying. I’m sorry that I doubted you”, Ben proclaimed.

Tears began rolling down his face as Jas realized that Leorio had been defending his honor. Wow, he thought, Leorio had cared enough about him to get kicked out with him. Jas walked slowly over to him and embraced him in a huge hug. “I love you”, he whispered. He knew that he wouldn’t be able to understand what Jas had just said, but the hug spoke louder than the words ever could.

After the meaningful embrace, the music was turned to max volume as all the pups rekindled on the dance floor. Ben ran over to Jas and Leorio and explained that Jas was completely welcome to stay within the club and apologized for the havoc that he had wreaked. Smiling, both Jas and Leorio went into the center of the circle and danced their hearts out. They knew that they found their furever home.