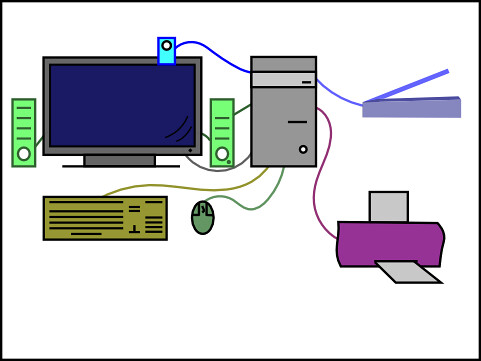 “Computer with peripherals” by Dnikolos is licensed under CC BY 2.0

In the world we live in today, most people have a cell phone that contains social media applications. It is also apparent that almost all teenagers have cell phones with social media applications which is a concern due to the fact that their brains are still developing. According to a poll taken by the Pew Research Center in 2018, 95% of American teens have access to a cell phone. While there are benefits to having cell phones there are also many disadvantages that affect college students mentally and their success. I will be putting an emphasis on how much time we spend on our cell phones, how cell phones directly affect our school work, and how cell phones directly affect our mental health. This topic has intrigued me since my best friend Johnny Nick who attends Marquette University had to give his phone to his professor for 2 days and write a reflection paper about his experience without his phone. In those two days without his phone, my friend said that not only did he get more schoolwork done but felt that he had a much clearer mind which made me want to look into this topic. Oddly enough, last semester my Communications teacher assigned us a very similar task. We were supposed to stay off of our phones for twenty-four hours and talk about things we noticed while not having our phones. It turns out that I was not only much more productive, but it was a much needed mental break from the digital world. I realized that if I saw a major difference from one day off of my phone that there had to be a plethora of information about this topic.

This brings me to my first main point which is how much time we actually spend on our cellphones. According to the Mcgill Office for Science and Society, Americans are on their phones over 5.4 hours per day. They also concluded that Americans check their phones on an average of 58 times per day with over half of those checks during school or work hours. I had to read those statistics a couple times over because I could not believe what I was reading. If you were to average 5.4 hours on your cell phone per day that would mean you spend 37.8 hours on your phone per week. That is over a day and a half per week staring at a screen! This also does not factor in people whose work requires them to be on a computer all day. I can only begin to imagine the things one could have accomplished with all that time but instead that time was spent on pointless social media. After reading these statistics I checked my screen time to find out I spent around 4 and a half hours on my phone per day. This made me upset because I was not aware of how much time I was spending on my phone and felt that 4 and a half hours per day is much too long to be on my phone. My screen time has gone down a full hour since I have been much more self aware of how much time I spend on my phone, and I encourage everyone to diligently monitor how much time you are wasting staring at your screen.

Knowing how much time on average we spend looking at our phones brings me to my second point: how cell phones directly affect our schoolwork. Clearly, if you are spending time on your phone instead of doing homework that will lead to unsuccessful results in the classroom, and several studies have shown that just having your cellphone in your possession can negatively affect your learning. One experiment led by Ian M. McDonough, a professor at the University Alabama consisted of 380 of his college students who all watched the same 20 minute TED Talk lecture and were quizzed on it after. Some students were not allowed to have their phones at all, some were allowed to be on their phones, and the rest had to leave their phones in their pockets. The students who did not have their phones scored the highest by a landslide, the ones whose phones were in their pockets were second, and coming in last were the students who were allowed to be on their phones. Another study from the Pew Center’s Internet and American Life Project found that cellphone use negatively indicated one’s GPA. After learning about these statistics I started to leave my phone out of the room while doing homework and found that I was much more focused while not having this distraction in my presence.

That brings me to my final and most important point which is how cellphones directly affect our mental health. According to one study from the Pew Research Center Poll, showed that those who use social media for more than three hours per day were at an increased risk of developing mental health problems. This was staggering to me because as stated before the average American spends almost double that on their phone per day. These mental health issues were leaning towards more internal issues such as depression, stress, or feeling lonely rather than external issues such as acting out. The second study was an analysis of 12,000 teens and research showed that 2 out of the 3 teens used social media multiple times per day. The research showed that teens who used social media multiple times per day were more likely to report stress and anxiety rather than someone who did not. The study showed that girls were more prone to feeling distressed from social media rather than boys by almost 13%.

In conclusion, at least one of the factors I have discussed today affects everyone in one way or the other. Cell Phone addiction’s negative effects have had a major impact on college students whether it be in the classroom or mentally. Being more mindful of how much time we are spending on our phones can limit our chances of having mental health issues and can possibly lead to more success in the classroom. Knowing what I know now I feel that I can truly make an effort to cut down my time being on my phone and I encourage everyone to do the same. While there are benefits to having cell phones there are also many disadvantages that affect college students mentally and their success. If social media is having a direct impact on people’s mental health I feel that this matter should continue to be looked into. My hope is that these statistics are advertised much more than they have been and I truly believe this will help people. As Albert Einstein once said, “I fear the day that technology will surpass our human interaction. The world will have a generation of idiots.”

The effect of cellphones on attention and learning: The influences of time, distraction, and nomophobia, https://www.sciencedirect.com/science/article/pii/S0747563218301912, Jessica S. Mendoza, Computers in Human Behavior, April 14, 2018