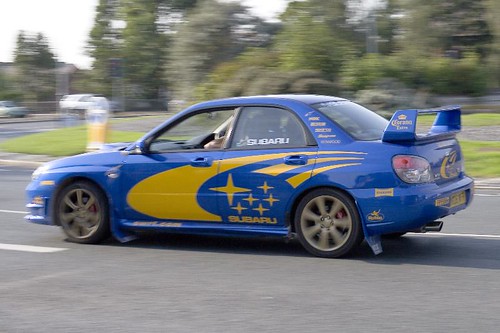 “Sports car” by SarahCartwright is licensed under CC BY-SA 2.0

Cars have been around for over a hundred years and become an integral part of modern society. Cars have become the main source of transportation for many people around the world, and with new technology forever expanding, it was only a matter of time before cars and computers came together to make life easier. To the average car owner, computers in cars only seemed to be thought of as GPS, air conditioning, and radio but there is much more to that. In fact, if it wasn’t for computers, almost every car today would not be able to run. The ECU in a car is the central computer system that tells the car’s engine what to do. It controls how and when the pistons fire and how much fuel is injected. Computers give the car better performance, give the driver more information to help them drive better, and give the driver more options to help the driver’s experience.

Computers provide cars with better performance that can help the everyday driver. Older cars originally had engines in them that used mechanical ignition which is “a series of off and on switches for ignition timing,” an example of this was the carburetor (Olsen). Mechanical ignition engines didn’t use computers; they worked “by sending a charge from a battery to an ignition coil, which essentially stores a high voltage charge that discharges when provided with a path” (Olsen). This was very basic and was often not set up to be able to run efficiently but was set up to just run in general and was more complex to fix. With the improvement of computers, the design for ECU or engine control unit, came out which is what modern cars have. ECUs use sensors to collect information about what is going on with the car. The car then uses this data to adjust the different components to work in the limits that are programmed to the ECU (Olsen). This allows the car to adapt to conditions that arise while driving like, for example on a cold day the engine could be running cold, so the ECU adjusts the other components to prevent the engine from shutting down or not being able to start at all. Another example of ECUs providing better performance: in automatic cars the car shifts gears at the best time to provide the car with better fuel economy, but when the driver pushes the gas pedal all the way to the ground, the car adapts to shift gears so that it gains speed as fast as possible. ECUs improved the way that cars run which made cars in the modern day much more reliable and performing at the cars best.

ECU’s not only help the everyday driver but also can allow racers and people looking to get the most out of their cars because of their ease tuning. Drivers are able to plug in a laptop to their car’s ECU and change how it functions during certain situations so that they can get the best performance out of their car. Cars when they come from the factory have ECUs that are set to have limits because of regulations and laws that manufacturers have to follow (“Boosting Car Performance with Computers”). Since they are limited from the factory, many drivers looking to get the most out of their car tune it past what the factory sets it at. Tuners are able to go in and adjust the ECU’s settings by using its software. For racers they often go in and remove the speed limiter and the rev limiters (Beckford). A major example of this is the cars when they “remove the speed governor and unlock a car’s true top speed” (Beckford). This allows drivers to hit speeds that are being held by the car’s computer which gives a driver more speed in racing. By tuning a car’s ECU, you can unlock more of your car’s potential allowing you to race better and perform better.

Computers not only can help the car perform better but can provide drivers with more information that can help them with their driving. One thing that almost every car has is the different sensors that can provide the driver with the information that can help identify what issues are going on with the car. Sensors like tire pressure, coolant temperature sensors, intake sensors, and various sensors in the engine. These sensors can alert the driver when things are going wrong with the car and what needs to be fixed or can tell you how to change your driving to help the car. Mechanics can now use the car’s ECU to see what exactly is going on and then make adjustments to the car. In racing there are many different sensors that help the racing driver and the crew see what is going on with the car and the driver. Cars are equipped with many sensors that allow them to collect data on what is going on while they are racing. In racing the driver “slam(s) the brakes on and the car goes from about 210 mph down to 150 for a 90-degree right-hand turn…Suddenly, the driver is enduring as much as 5.5Gs” this data is then sent to the pit crew to analyze how the driver can go faster (Kaplan). The sensors in the car allow the racing crew to see where the driver is losing speed and many other things which allow the driver to see what they can do to drive better.

Computers can provide drivers with more options to help their driving experience. With computers constantly adjusting what the car is doing and with this companies are now starting to introduce cars that can be adjusted with different modes. Lamborghini has really taken this to the next level with one of their newer cars, the Lamborghini Urus. With the Urus they introduced a car that had many different modes that give the driver different options and things to experience. It introduces a bunch of different modes like Neve or winter, Sabbia or sand, Sport, Corsa, Strada or comfort, and Terra or off-road (Falkenberg-Hull). Each one changes how the car handles by adjusting the suspension, gearing, power to each wheel, and many other things to allow the driver to customize their experience. Sports mode is a very common mode in most cars today but with Lamborghini’s Corsa mode it takes that a step further making the car track ready all with the click of a button. Lamborghini utilizes the car’s ECU by programming it to have all these different modes which allow the driver to use the car for any situation that they like. When the mode is switched the ECU,

“will change things such as the throttle’s responsiveness or the shift pattern of the transmission. More advanced versions, more commonly found on newer vehicles, will also work with the ignition timing and fuel quantities or the air:fuel ratio. A few will also work with the electrical system and air conditioning, reducing their load on the engine.”

“Eco Mode: Why Do Cars Have It and Should You Use It?”

This is an example of what happens in eco mode on cars. Sports mode in most cars doesn’t actually change the timing of the engine but it changes when the car shifts so that it is staying in the optimal power point which allows the car to go faster. This would have never been possible without the introduction of an ECU.

Cars have been around for almost a hundred years and with the rise in technology we are able to make some of the greatest advancements in cars. Computers were one of the best things to happen to cars because they can improve performance, provide drivers with more information, and give the driver more options for the experience. One of the cars main computers, the ECU allows the car to be tuned for maximum performance in whatever way the driver wants. The ECU controls how the components of the car interact with one another and is very easy to program it to your liking. Not only is the ECU good for tuning but it also is good for finding out information about how the car is running through the many sensors that the car has. These sensors are what help the computer know how the car is doing but also the drivers can see this and use it to make adjustments in their driving or fix something wrong in the car. Everyone wants options, with cars coming out with modes for cars they allow the driver to have options in different driving situations all with the click of a button. With the ECU’s able to change the position and functions of components so quickly you can go from off-road on a trail to racing on the track with one switch. Computers are ever expanding and with each new breakthrough allows a new breakthrough to happen in driving, computers are only expanding the abilities of cars.