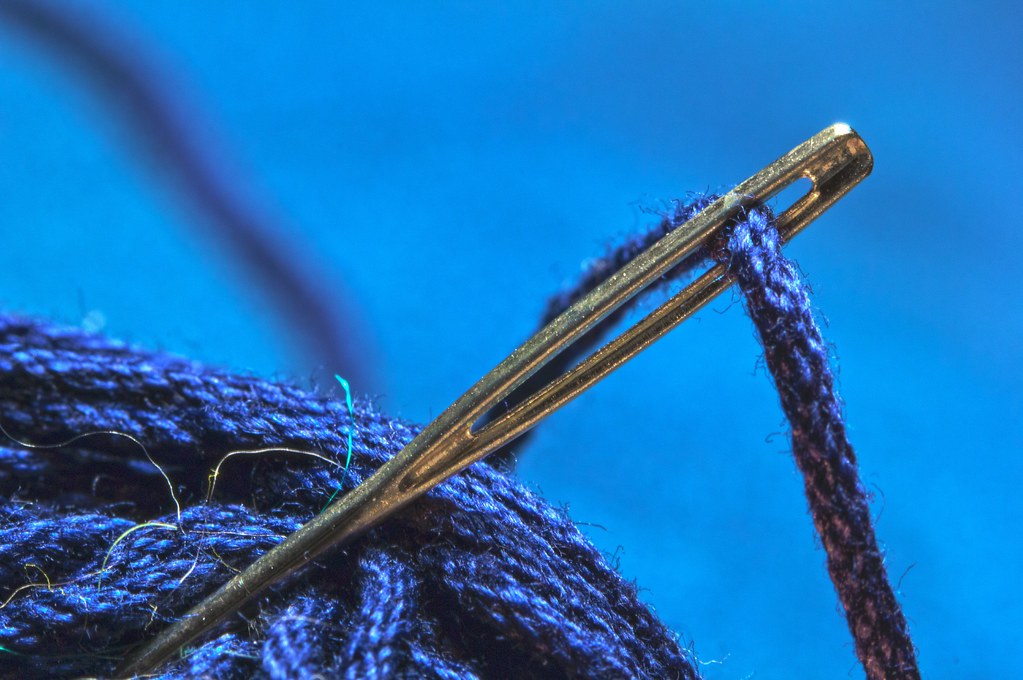 “sewing needle with thread” by Markus Grossalber is licensed under CC BY 2.0

The blasting, robotic alarm trilled for exactly two rings. Glorio rose out of bed and into his silk robe. Exiting the master bedroom, Glorio entered the open-concept living space of his penthouse apartment with the Gelu insignia on his back: a rigid, metallic “G”, the embroidered thread holding its shape no matter the twists and turns of his body. The head of Gelu sat at the white marble island on a cold, hard black stool in front of his grandiose assortment of food and looked down with a hard frown — his natural, resting attitude — at today’s headline.

“10 YEAR ANNIVERSARY SHOW OF BIGGEST NAME IN FASHION DEBUTS TODAY, AMONG STRONG PROTESTS OF WORKER TREATMENT.” Glorio’s frown deepened. All press may be good press, but still. Good press increases sales, but this headline seemed to do the exact opposite.

Had Glorio read the article (He didn’t; there are workers for that), he would have revisited the massive strike of employees of all levels which triggered an endless year of speculation and scandal onto his label. Nationwide protests over “inhumane working conditions” and “humiliating wages,” led to #Geluisoverparty trending on twitter for weeks. Users were saying even Amazon had more humanity. That was concerning. Glorio thought it was a stretch, but protestors ran with it. Gelu became the focus of countless demonstrations, and unified groups to create a whole coalition of workers’ rights.

Meeting his driver downstairs, Glorio stepped into the back of the long black car. He scrolled on his cell phone as people pounded on the windows of his car, shouting and waving signs. He paid no mind, but his driver had broken into a cold sweat, begging for the New York traffic to magically disappear.

“They should really be thanking us,” Glorio smirked. “We’ve filled their activist schedules for months to come.” His driver just sat, grim lipped and wide eyed. He wouldn’t dare speak up, but he knew better than to show agreement. Glorio didn’t ask for reassurance or acknowledgement. Workers were there to work, and not exist to him outside of that.

“Yes, well, hello Glorio. I hope you’ve had a good morning so far. Big day today! Exciting, no?” The man couldn’t meet his eyes. The woman next to him could, though. Glorio turned to her.

“We have your products ready, they’re already at the venue.” Almost willing a challenge.

“Wonderful. I assume you’ll be there to turn them on?”

“Yes, of course. But we have some concerns to address with you.”
Glorio smirked. “I didn’t pay you to have concerns. I paid you for robots.”

The woman offset her lower jaw. It jutted out as she exhaled. “Yes, but you paid us for Artificially Intelligent robots. We didn’t-”

She stared at him. The man next to her looked as if he was attempting to sink into his chair.

“Yes, actually it does. We didn’t know the content of the show before going ahead with this. You can’t do your show like this. Do you know how these AI robots work?”

Glorio rolled his eyes. What a cliché; the analytical scientists who obviously don’t get out much come to bid apocalyptic warnings due to the danger of their own makings.

“I know they work enough to walk a runway, that’s all I care about. I don’t know if you’ve noticed, but I can’t exactly have actual people wear my clothes right now. I’ve fed those dogs more than enough meat to chew on this year.”

“Yes, we understand, but if you’d listen to us, we really think the media at your show would cause-“

“Thank you both for your time. Kindly leave my office. Try not to get stoned once you step outside of this building.”

The woman smiled, not so much in pleasantness, but rather in malice.

“Please do not expect any business with us moving forward, and we ask you do not use our name at all in the showing today.” They left. Glorio frowned again. He likes having the last word.

By midday, the venue’s entrance was already plagued with protestors around the doors. Someone leaked the location of the show. Glorio made a note to make everyone suffer for that.

His security carved out the crowd for him. His entrance was met with panicked faces and nervous swallows. Only two hours from showtime, guests would be arriving soon. Glorio went backstage to check on his toys.

The robots were beautiful. Sleek, smooth metal made the machines look statuesque. They didn’t quite shine, but they weren’t dull, either. They radiated cold power. Glorio felt like he was having a family reunion. If he was emotional, he would have been moved to see himself reflected back in the faceless heads of the robots, distorted like a funhouse mirror.

Technicians set up the supporting media, both visual and auditory. Glorio wanted to use this show as a statement. Videos of the protests and demonstrations would play as the AI robots walked the runway, wearing Gelu’s new collection. The ultimate middle finger to the media and the protestors, Gelu was stronger, resilient. Gelu was a machine. It didn’t need emotional people to survive. Feeling smug, Glorio approached the technicians with a new idea.

“I want a livestream of the protest outside instead of the prerecorded media.”

“You…you had us working on this project for months…”

“And the job isn’t done yet, and it’s changed. Do it.” The technicians looked at one another, and went back to work, even more frantically than before. Glorio strutted away.

The workers, or what was left of them, wrapped up their duties just as the guests arrived. The biggest names in the fashion industry filed in, mingling about before they took their seats. Critics, magazine editors, column writers and celebrities all populated the venue. Glorio was pleased; the world of the elite is not perturbed by the noise made by the lower working class. Living this large, one isn’t much distracted by noise made by ants.

Finally, the lights dimmed, and the show began. The clothes were gorgeous. The pristine white cloth featured in every piece of the new collection looked iridescent paired with the radiating bodies of the AI machines. The synchronous walk, learned through programming and spatial intelligence, mesmerized the audience. Special lighting created emphasis on the breathtaking silhouettes of the “models.” Gelu will be taking its rightful place on the throne of fashion, no doubt, thought Glorio. His smug smile was almost as glaring as the lights reflecting off the strutting machines.

Unfortunately, Glorio did not know how Artificial Intelligence works. Nor did he really pay any attention to those who did. Only the two scientists knew, and they were far from the venue by now.

Artificial Intelligence works much like the brain. Stimuli is taken in, processed, and then acted upon through a neural network. With humans, we have many things guiding our processing; guardians, morals, friends — anything that is able to tell a person that an idea or thought could be good or bad. We have a basis for taking in information and discerning whether or not some information would be of good use in a situation.

Robots have no such guidance. Artificial Intelligence can have blockers built into the processor, to cut off certain areas of the robotic “brain” that would cap off the AI’s abilities or intelligence reached, but all in all, Artificial Intelligence is born starving for as much information as possible. It builds its own complex system of thought and computation through deep learning, mimicking the proceedings of the human brain. The human brain learns largely from a show-and-tell system, or copy-catting, as does Artificial Intelligence. So, twenty-four robots, lined up walking in a large room with videos of protesting Gelu, as the venue is covered in the Gelu insignia, invites a very quick computation for the robot models: Gelu is bad, and Gelu is here, among them. Humans need help against Gelu. And, to top it all off, the AI robots are walking to a solid beat, which is punctuated by the livestream of the protestors outside, chanting, “Death to Gelu! Death to Gelu!”

So, the robots did what they had processed to be the only thing to do.

The models left the runway, amongst surprised exclamations from the crowd. The attendees are delighted at the immersion of the show, until the robots start to grab at the audience. The surprised exclamations turned to wary startles as patrons are lifted off their seats by their necks, then, panicked shrieks when those necks were broken.

Hell broke loose. The lighting director for the show had been the first to be killed by the models, so the venue was still almost entirely dark, besides the runway being lit. The noise and pandemonium created more chaos and overloaded the processing in the robots. They kept up with the frantic people, and soon the runway was highlighting the still bodies of the patrons, who didn’t strut or model anything but rather painted the runway a thick, deep red. The models continued their way through the crowd, bloodying their perfect white gowns and pieces.

This was not exactly what Glorio had planned for the show — far from it, actually. Glorio darted as soon as a column writer for the New York Times, was choked. Glorio made for the door. Lights or no lights, being in the business and having the same venue for 10 years allows for intimate familiarity of a building. Glorio ran out, practically throwing himself out the doors of the building.

And into the throes of protestors and rioters.

Glorio’s death was unintentional, a consquence of the initial plan to storm the building, keeping the attendees and workers and Glorio himself hostage until needs were met and changes committed to be made. They hardly noticed Glorio, just the massive entrance door opening. Glorio had time to deepen his frown before the crowd charged.

Those they trampled on were mere sacrifices of their overall progress towards success. One ant’s sacrifice doesn’t destroy the hill. So, they entered over the body of Glorio, his Gelu insignia ripped off from his blazer and plastered to the bloody brick next to him, and witnessed the new supermodel standard take the runway once again, this time crimson-clothed and ready for another show.