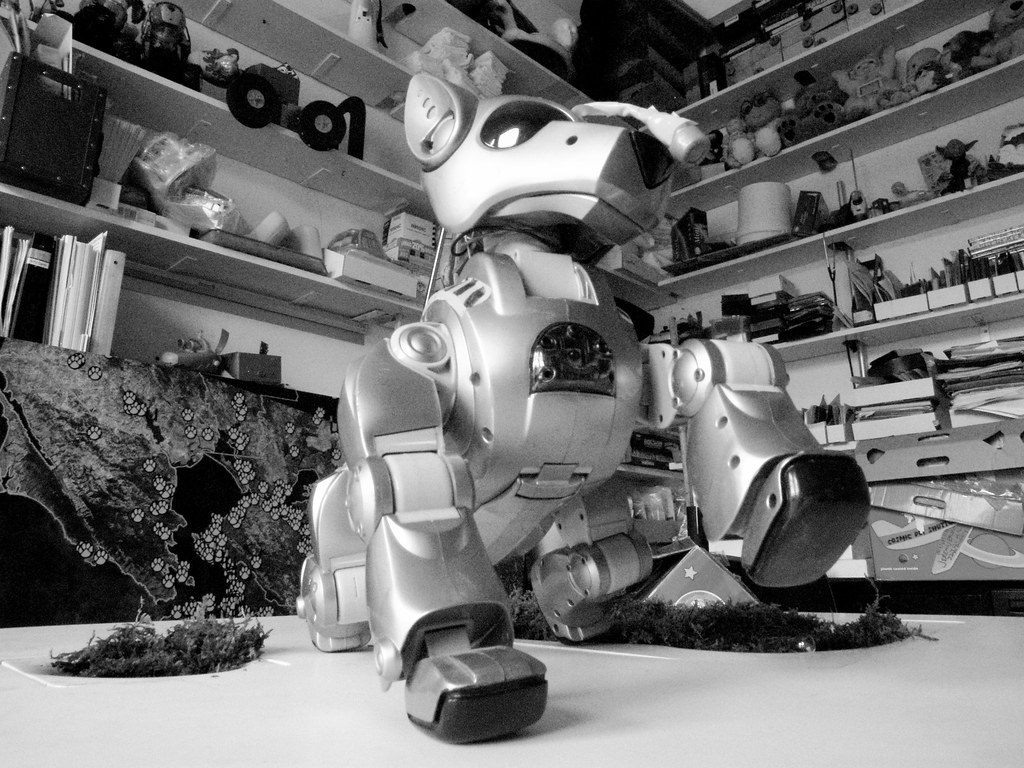 “Feral robotic dog” by jeferonix is licensed under CC BY-SA 2.0

Cierra was just a normal little girl, right down to the small town she was growing up in. The one thing she always desired was a pet dog, like most other kids her age had at home. You see, she lived right up the street from the town’s doggie park. Several times a week she would stroll past and just watch everyone with their dogs, and wish she had a best friend like that too. Unfortunately, her mother was highly allergic to them. Cierra wasn’t even able to play with anyone’s dog for fear she would bring the dander home on herself, leading to her mother having a severe reaction.

As her tenth birthday was quickly approaching, Grandpa had asked her the normal question every child gets at this time. “What would you like for your birthday?”

As her eyes lowered and she sighed, “same thing I ask for every year and can’t have. His heart was breaking for her and he knew he needed this to be the last year he would get that response from her. Grandpa was determined to deliver her a dog for her birthday! He was able to get in touch with some of his friends from his old army base to get the supplies he needed such as titanium, steel, tiny motors, plastic coated wires, and cameras. He would build her a robot dog that would be controlled by remote controlled artificial intelligence.

He spent days planning out his project’s specifications. How big would he make the dog, what colors would he use, should the paws be big or small, what language program should he use? How this robot functioned was all up to him, and he wanted it to be special for Cierra. It had to include vast amounts of data with fast processes and superior algorithms, making it possible for the systems to learn from patterns automatically. It needed everything! He spent the next few weeks leading up to Cierra’s birthday building her best friend, endless nights included.

Finally, the day came for the big surprise and Grandpa could hardly contain his excitement. As Cierra was finishing up her gift opening in the back yard, Grandpa grabbed the remote and walked in the robot dog. Confused at first what this could be, Cierra was unsure of her reaction. It wasn’t until grandpa made it function just like the dog she always wanted, that she fell in love instantly. Excitedly she said, “I shall name him Torque!” As he showed her how to lead Torque through his motions, and what all he was capable of, she knew that she had something very special; that no one else had in her small town.

As the weeks passed, Cierra and Torque grew much closer, even inseparable some would argue. He was learning from her all the time. Her sweet and caring mannerisms, the times of day he could charge while she was at school, and their frequent visits to the doggie park even found him making some new doggie friends. Little did she know at that same time, the envy of the town bully was growing tremendously. He secretly watched her and Torque from afar, learning about his performance and capabilities. It wasn’t long before he came up with a plan of his own to take Torque from her at the park. He just had to have this robot! He envisioned all the calamity he could create, just by making Torque’s behavior violent and deviant in nature. No longer would he need to do the dirty work himself; he could unleash the robotic dog on his unsuspecting prey.

One day Cierra and Torque were playing at the dog park, which was unusually empty compared to normal. The bully knew it was his best shot to roll out his plan of attack and capture. He snuck in and hid within a play structure where she couldn’t see him. He patiently waited until they came closer. The time was just right to strike! He jumped out, knocking Cierra to the ground. The remote went flying from her hands. As she lay there crying, the bully grabbed the remote and picked Torque up by his body, running away before anyone else could see what he had done. Heartbroken and bruised, she returned home to tell her mother of the events that took place. As evening was drawing near, her mother assured Cierra that the very next day she would contact the bully’s mother. She promised to do whatever needed to be done, to assure his safe return.

After Friday night dinner, as Cierra waited for nightfall alone in her room, she just couldn’t wait for her mother to do something the next day. She called her grandpa on the phone and told him about the debacle. He was so upset and angry that he too wanted to do something right away. He came up with an idea and told Cierra what he had planned to do. With her help, they would reprogram Torque’s artificial intelligence to respond to voice recognition only. The pair worked secretly throughout the night, recording new language for him in Cierra’s voice. Right before daybreak, as the bully lay sleeping in his bed, the switch was completed. He would awaken to the treasure he recently acquired, not functioning anymore. Once his parents learned of the situation via a phone call from Cierra’s mother, he would be forced to give Torque back. After all, who would want a robot dog that no longer worked? Their plan was foolproof, and boy did they have a surprise for him too!

The next morning, it was agreed upon that the two families would meet in the town square at noon for the exchange. Saturdays were bustling in their small town, especially in the town square, as it housed many restaurants and a small movie theatre for the townsfolk. People were bound to be out and about to witness just what this youngster had coming to him. Cierra suggested to her mother before they left, that they should ask Grandpa to come along. What if he had tried to destroy Torque, or mess with his functions? Grandpa would be there to evaluate the damages right away. Unaware of their late-night shenanigans, her mother quickly agreed. Cierra said, “I’ll call him and let him know we are on the way.” They proceeded to pick him up and head to the meeting.

Upon arriving they found a bench by the water fountain and waited for the bully and his parents to show up. Minutes felt like hours to Cierra, but she was often distracted by grandpa’s smirking as he thought about their plan from the night before. When the youngster and his parents showed up, they were profusely apologizing for the behavior of their son, hoping that the family wasn’t going to need to get the authorities involved. Torque and his controller were gently placed back into the arms of Cierra. She turned towards her grandpa and asked him to check the condition of the robot. Once it was clear that Torque was unharmed during his capture, the families made amends and proceeded to go their separate ways.

Cierra quietly spoke to Torque, and he became alive again with his new capabilities. She instructed him to run up the sidewalk and bark uncontrollably after the bully, who now thinks he no longer works with the remote, and scare him into running away from his attack. I guess you could call it karma, revenge, or clear satisfaction, but the bully was tripped up by his own feet a fell face first into the fountain’s water pool. As to add insult to injury, everyone outside had heard the commotion and looked to see what the matter was. This of course included many young children who attended school with Cierra and often were victims of his ridicule themselves. They laughed and cheered as to say he had gotten what he deserved, a taste of his own medicine. As she called for Torque to return to her, he followed her instructions immediately. The voice recognition was working!

Days and weeks had gone by, and Cierra and Torque became even closer. She was thrilled with his new way of communication, she no longer needed to carry around that remote. She was able to ride her bike as he chased her down the sidewalks, throw the ball and play fetch with him, and best of all…hug him with both arms! She finally had the friend she so longed for. All her friends at school had heard of the happenings, and what Torque was able to do for her. She by far had the coolest Grandpa in the world according to them. They wanted to know if he was going to be making any other robots, and how they too could get one of their own. Unfortunately for them, Torque was one of a kind, built especially for the little girl he loved the most.

This video showed me what many variations of robot dogs look like. I was able to determine how they were being controlled, what capabilities they had, and the conditions in which they could persevere through.

McIntosh, Will. “Watchdog.” Delacorte Press, October 10th, 2017.
This book describes a fictional story of 13-year-old twins and the incredible machine they built, a loyal robotic watchdog named Daisy. However, they too were faced with the task of upgrading their pet when local crime boss Ms. Alba schemes to add Daisy to her robot army. With their mechanical skills, they could make Daisy bigger, stronger, and a lot more intimidating! I found this storyline similar to mine, and I was able to take away ideas for kid-friendly action.

A very informative website I used to learn about artificial intelligence. It gave me fundamental definitions, the basic types of AI technology, how AI is programmed, and the various “languages” used to program it, and how long it takes to code. I used this information to construct a better timeline for my story.

Chrissy Grebe is an adult learner who is working towards a bachelor’s degree in business administration. She is an accountant for a public school district in PA. She has two grown children, and a dog – who of course is named Torque! She enjoys vacationing and seeing her daughter in Myrtle Beach, SC as often as she can.