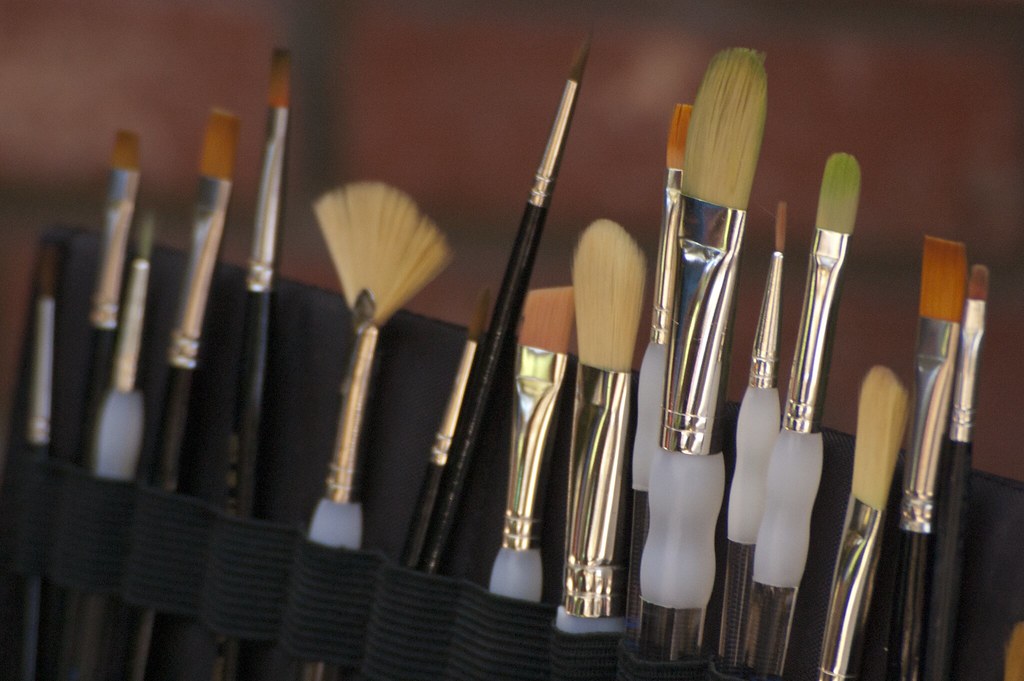 Alex began her day as usual and went down to the art gallery. She walked into the back room and started to brainstorm ideas for her next piece. A poster hiding in the corner caught her eye. The poster was misogynistic and from years back when women were looked down upon. A fire started within her as she began to think about the treatment of women in the past. She wanted to portray the empowerment of all women in her next piece, but the responsibility was enormous. Alex accepted the challenge and sketched out her idea. She started with big strokes then proceeded with smaller until the piece came together to her liking. This piece took the longest time to create as she wanted to get each detail correct. Once finished, the work would then be hung up in the gallery for auction later that day. Until then, she prepared the gallery to open for possible buyers and art enthusiasts.

A man walked into the shop as soon as it opened and just walked around observing the art. He saw Alex’s new piece and stopped in his tracks and stared. The piece was demonstrating the strength women have, which was still looked down upon by the government at this time period. He demanded to know who was behind the piece immediately. Alex took a slow step forward. The look in the man’s eyes once he saw Alex was devious. He explained his interest in the painting and his involvement in an important “artist” committee. The committee oversaw a challenge that used computer programs to create pieces of art. The contestants would compete for a panel of judges, known as the elites, to win a spot among them. Last place would be taken by the security and never seen in public again. The man did not include this information in his explanation to Alex. She knew about the spread of rumors about where they would be taken after and the only answer that was reasonable was a secret prison. The man had plans to silence her before her work came available for the public to avoid an uproar. In order to do so, he made an offer on the painting which Alex gladly accepted for the gallery.

The man offered her a place in the competition. Alex thought that spreading her idea through art would be an excellent way to gain interest of the elites. She hesitated at the initial offer but gladly agreed to the opportunity. After signing the papers, the man revealed to her the conditions of the competition. She would be facing popular artists, well known among the elites, and using a computer program to create the piece. Alex began to worry as she has only created art using her hands, not a computer. The man walked away quickly with a sly smirk.

He had taken the painting with him to show the judges of her threat to the government’s establishment of gender status. In the meantime, Alex was beginning to panic until her colleague, Jason, came to calm her. He overheard the entire conversation and revealed that he had worked with a program before. A wave of relief went through her, then she begged her colleague to help her prepare. The contest would take place three days later so the time was ticking. Jason agreed to teach her the basics on how to navigate the program. The program would not allow for manual strokes on the computer but selecting different tools to create the shapes. Alex was discouraged because the program was set up with hidden tools under certain icons. The program for the contest would not be the same as the one she was practicing on, but she decided to get a feel for the system in front of her. Alex finished her lessons with Jason just in time for the challenge and created some digital art to publish later. She felt confident in her ability to work the program after long nights of lessons.

Alex was picked up by an official government car to travel to the competition. The car was tinted from the inside so contestants would not be able to see the way to the arena. It was a short, silent, and lonely ride as the artists were taken individually. Alex desperately wished for Jason to be by her side, but she knew deep down she was able to do this alone. Contestants were then brought into an arena where cameras, computers and stations were set up specifically for each individual. The judges were on an upper section to observe the progress of the artists. The section was concealed so no elite could be recognized and targeted after the competition. The artists took their places awaiting directions from the officials. Alex was nervous and began to sweat as the pressure started to settle in. “GO!” screamed through the speaker in the middle of the room and artists frantically got their projects started. Alex navigated the program before beginning her brainstorm of ideas to make her progression smoother. She thought making a statement piece with a meaning behind the art would guarantee to impress the judges. Thinking back to the piece the man found interesting created a spark to make one just like that. She began to draw a woman figure in the center of the work using different lines and circular shapes. Other artists began to place finishing touches as Alex just began her work. The judges became excited when Alex began to panic as the time lessened. The program offered a variety of shapes and colors hidden behind different icons. Alex learned the program’s functions and created her project rather quickly. Jason’s teaching truly helped Alex gain an advantage to finish her work rand take time to inspect her work. She decided to finish the piece with some of her own touches to tell a story about facing hardships to become a female artist in the world. Alex related to her work as she faced trouble opening the gallery and generating attention.

The timer ended, and all artists were demanded to stop their work. Alex had finished her piece just in time and took one last look at her piece. She was proud of her ability and the clear message behind it. Women empowerment was portrayed all throughout her work with women in different positions holding authority. Two women were pictured in suits and another as a dancer on a stage. The meaning was to inspire women to chase what they desire and make a name for themselves despite the judgements faced by the current society. Although the plan was to choose another artist over Alex to keep the control of men intact, the elites were truly impressed by her work. The judges were a mix of both women and an outnumbered group of men. Women were impressed by her work and inspired to encourage the next generation of women to come. In the elite group, women were thinking about their children and how they wanted their daughters to become elite as well. The men continued with the original plan to choose another artist to protect their advantage in the world. At the voting announcement, the results were neck and neck between Alex and a well-known male artist. The judges chose Alex as the clear winner of the challenge and presented her an invite to the elites.
Alex was filled with accomplishment as she had beat some of the best artists in the world. She noticed that after the announcement, no other artist was punished for losing as she would have been. In that moment she had realized that it was a set up to prevent her ideas from spreading. Alex declined the invite and went on her way back to the gallery to share the news with Jason. He already knew as news started to spread of the contest and the results directly after the competition. Many people began to come to her gallery wanting to look at her art and inspiration. The gallery grew along with Alex as an artist. She gained a following and encouraged other women to make a name for themselves.

Later, Alex became one of the most well-known artists of her time. She even earned herself a spot in the elite group by her hard work but again declined the offer. After her initial experience with the elites, she did not want to have any part in their organization. To spread her work even further, she began to use that computer program from the contest in her recent work. The program allowed her to create pieces in 3-D, which cannot be done by the old technique. She realized the opportunity that presented itself by using the program to boast her work. Many followed her steps and started using computers to create art and easily share to the world. A website she created, with Jason, worked with the program so her followers could submit their own work on her page. The program allowed for all types of creativity to bloom.

The games had different men go around to people with debt and offer them a chance at games to win money. I used this concept to have a prize to join the elite group at the end of the contest. Many of the participants in the game would be shot if they lost the games, which relates to how the losing contestant of the art challenge would be taken away.

Computer programs have many different components to the functioning. I am going to implement the process to creating a program more in the final draft. The functions of the program will be discussed specifically along with the creating of her own website.