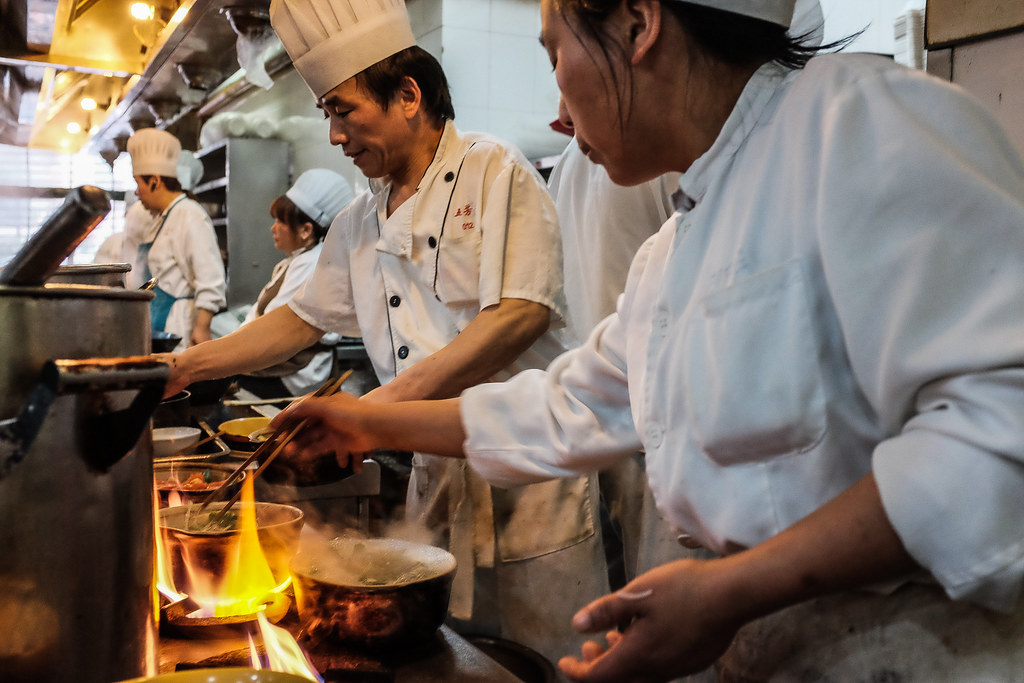 “Cooking is hard work!” by mripp is licensed under CC BY 2.0

To begin with, there are some restaurants that are using artificial intelligence to help take orders and be of an assistant to the customers. One of the popular artificial intelligence advances in the cooking and restaurant world are making kiosks to help chefs and workers with specific tasks. For example, according to Restaurant Business it says, “Starbucks has been working with an artificial intelligence effort over the past year that it calls “Deep Brew.” That system powers the company’s personalization engine and helps manage inventory. But it also optimizes labor” (Maze). This is saying that by using artificial intelligence they are able to have less people working because the computers can take over that part and help the employees out. Also, according to Brittany Maroney, “Restaurants are using AI-controlled kiosks to increase capacity and speed up food ordering, preparation, and payment from the point of entry” (Maroney). This is also talking about restaurants using kiosks to help with food preparation and food ordering.

Next, now that you have an idea of how artificial intelligence is used to help in restaurants, let’s look at the science behind artificial intelligence and how it is programed to help cook. Artificial intelligence in your kitchen along with machine learning can help generate recipes of all kinds. Using research and learning mechanisms it can analyze a dish and tell you exactly what you need and how to make it. They are researching now how to take a photo and reverse it to find the recipe. This will help chefs because now when they see a photo, artificial intelligence can find the recipe. According to Meta, “Their “inverse cooking” system uses computer vision, technology that extracts information from digital images and videos to give computers a high level of understanding of the visual world” (Meta). Also, many computer scientists are working with chefs to create different was artificial intelligence can help them come up with different recipes and ideas when cooking. “Working with chefs at the institute of culinary education in New York City, the IBM team is building a cognitive computing system that, given plenty of data about what foods most people already like, will be able to come up with inventive, delicious flavor combinations” (Ross). This is using artificial intelligence to help chefs come up with new food combinations that are new and exciting and at the same time what the people want to be served and eat.

Next, there are many apps that computer scientists have created along with artificial intelligence, so that anyone anywhere can be able to cook and find recipes. If anyone on this world gets on their computer or phone and goes to the app store, they are able to access thousands of apps that will help them to cook or find recipes. According to the New Yorker, “Chef Watson, I.B.M.’s artificial-intelligence cooking app, is simple and welcoming, a minimalist canvas of four empty text fields and four dove-gray circles. You type in the ingredients, or let Chef Watson choose them for you according to its own mysterious logic. But, as an embodied being who has tasted those ingredients, you might be skeptical about combining them—especially when you scroll down to the suggested recipes and discover” (Kleeman). This is another app that uses artificial intelligence. This is helping people create recipes with the help of a real chef and random ingredients. This app is really neat because it takes random foods and creates dishes for them to make. Using artificial intelligence to help create app like these are game changers to the cooking industry because it gives everyone a chance to cook and explore different recipes.

Finally, we can use artificial intelligence to help restaurants prepare food and get ingredients ready. For example, JJCW states, “CHOPCHOP, is a cooking algorithm – developed by two team members who are PhD quantum physicists from Imperial College in London – that replicates how trained chefs determine the optimal sequence of steps to cook a meal” (Jjcw). This cooking algorithm can tell artificial intelligence how to prepare a meal which can be a huge help to chefs and the restaurant industry. They can use artificial intelligence and program it to pick out the number of dishes, what kind of ingredients they will need, and the cooking time of the meals. Once they work out all the kinks to this algorithm, this will be very beneficial for the cooking industry. Also, while researching articles, I came across an article that describes a robot that can cook a burger every thirty seconds. According to BBC it states, “It’s because the chefs here are not human. Creator instead uses two family car-sized robots that can each churn out 120 burgers an hour. They do everything from grinding the meat and shaping the burgers to slicing tomatoes, grating cheese, and dispensing mustard. Each burger can be customized with different sauces, cheeses and toppings, while an array of sensors monitors the beef as it’s precision grilled” (“The Chef That Can Make a Gourmet Burger Every 30 Seconds.”). like the algorithm form the example above, this restaurant also uses an algorithm with over three hundred and fifty sensors. This type of technological advance is very amazing, and more and more people will be inspired to now use technology like this because it is available. Artificial intelligence keeps expanding and growing, the more it is analyzed and developed the sooner it will be used in the cooking industry as a whole.

In conclusion, Artificial intelligence is the future for cooking and with more research in upcoming years, it could take over and we won’t need as many chefs or cooking staff because most robots will be able to do it for you. This can be a good and a bad thing for our world. The bad part of all of this will be that if the computer industry keeps advancing people could become without a job because artificial intelligence could take over. It also is a good thing because right now in our world the restaurant industry cannot find help right now to run restaurants. With the advance of AI, it could be a good thing because then the restaurant and cooking world could rely on robots to help cook and prepare food other than being understaffed and not having anyone to work. This is a great technological advance for the cooking industry, and I bet in a few short years artificial intelligence will be in the kitchen and teaching on cooking shows.