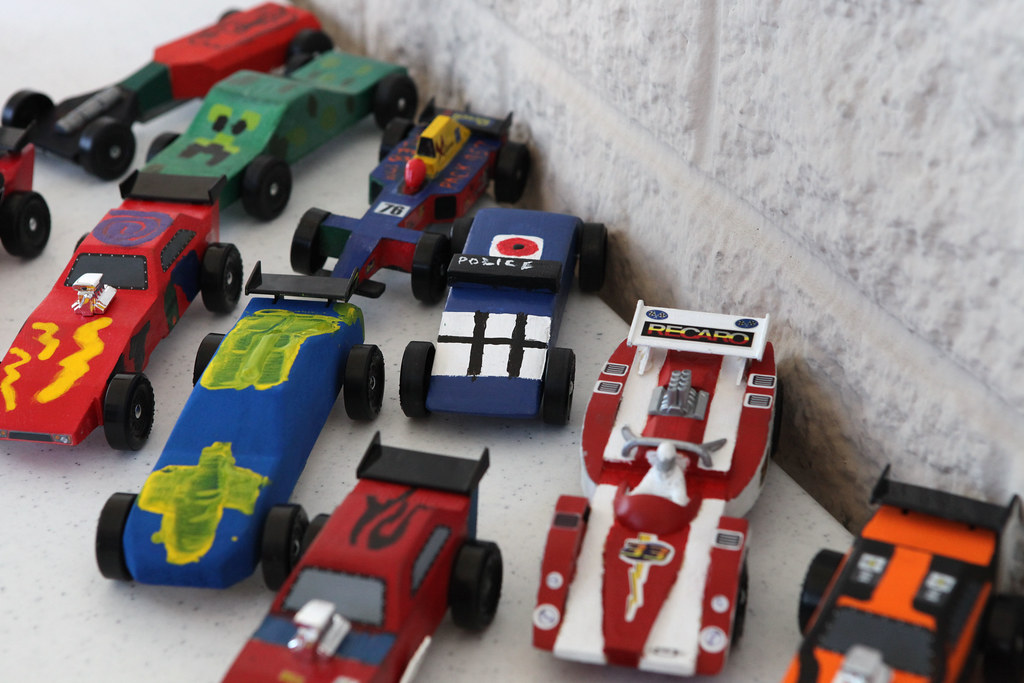 “Pinewood Derby Cars” by Sam Howzit is licensed under CC BY 2.0

Over the course of time, we have seen many advances in technology. We have seen changes in computers, cell phones, and now we are getting the point where self-driving cars are a reality. When we were kids and dreamed about the future, we thought of floating houses and flying cars. And now vehicles like Tesla, have made the driverless car possible. Now comes the development of the self-driving taxi or the “robotaxi.” Waymo, a subsidiary of Alphabet, a tech firm, is planning to launch the world’s first commercial driverless taxi service early next month in Phoenix, Arizona, according to an article posted by the Economist back in 2018. Despite technological advances, self-driving taxis will be ineffective due to the cost, lack of safety and the slow reaction times. All new technological developments come with problems and kinks that need to be worked out, however when it comes to driving and being out on the road, one mistake is too many.

Tesla has been at the forefront for technological innovation, especially pertaining to automobiles. They have been credited for developing and releasing the first lines of self-driving cars, and they don’t look to stop there. Tesla CEO Elon Musk has stated that he expected over one million robotaxis by 2020. Now the general category of “robotaxis” is an umbrella that covers taxis, as well as automobiles such as Lyft and Uber vehicles. The automobiles would be sent out to pick up a customer and then proceed to self-drive them to their destination. Along with Tesla, GM, Daimler, Volvo, Ford, Jaguar Land Rover, Audi and BMW are also developing solutions. There is obviously a large market for self-driving cars and self-driving taxis. First, who wouldn’t want to have experienced being in and transported by a driverless automobile? Second, today’s generation are massive consumers of new technology. Every time a new iPhone is released to the market, people toss their perfectly good and working phone aside to get the latest and greatest product. Lastly, the people who can afford it, will spend the money on it.

Other companies move their focus towards buses, larger cars or even smaller, more compact cars. But how do self-driving automobiles work? Who makes them work and how reliable are they? According to a 2016 article from the Guardian,

“The bulk of the technology required for self-driving cars is not all that futuristic, but it is the combination of different sensors with advanced computer vision systems that makes it work…Many of the vehicles use what is called Lidar (Light Detection and Ranging) – a rotating laser, usually mounted on the roof, that continually scans the environment around the car. Traditional radar is also used for detecting distances to objects and cars, as are various cameras, accelerometers, gyroscopes and GPS, which are all used in conjunction to build a 3D picture of the environment around the vehicle.” (The Guardian)

This new technology leads to a lot of hope for the future of self-driving cars and robotaxis. One prediction is that the taxi as we know it may become extinct. We are seeing more and more services such as Uber and Lyft develop popularity and success over time. Since they have started to take business away from taxis already, if they jump into this aspect of the game first too, it could mean bad news for taxis. The pros for self-driving cars are prevalent as well. First, as previously discussed there will be a large market for this service. Next, it takes away various distractions from the driver. There is no driver fatigue, road rage, temptations to text or eat, or more hazardous activity.

One of the most important reasons why self-driving cars are unreliable and will ultimately fail is the lack of safety. There is a huge risk you are taking any time you get behind the wheel. There are risks of malfunctions, break downs, accidents, police contact and more. These same risks are also present when you get in a taxi, or a Lyft or Uber. However, the risks become more dangerous. The control is taken completely out of your hands and put into another driver, often times a random stranger, whom you have never met. Imagine the same risks, intensified even more, because you aren’t putting your life into another person’s hands, but a machine. Despite all the new technology, data, programming, GPS, etc., certain situations on the road are impossible to predict or to prepare for. For instance, if you’re riding a robotaxi in a largely populated city such as New York City, or Los Angeles, anything can happen. Even though the automobiles have new sensors and impact technology, it would be very hard for a machine to stop at high speeds if an animal or a random pedestrian runs out onto the road. If an accident does happen, it then becomes who is responsible, the technology or the driver. A 2014 study from Brookings Institution seems to point the finger towards the car manufacturers. “Victims of a collision could (directly or indirectly through their own insurers) try to seek damages from a driverless-car maker for manufacturing a vehicle that didn’t operate as it was supposed to.” (Fung).

There is also no vehicle to vehicle communication. It is impossible as a driver to assume what someone else is going to do. How can a machine determine what other cars are going to do unexpectedly? And vice versa, how will other drivers react when they look over and see a car with no driver? Will that distract them? They’ll now probably be more likely to try and avoid that car, which can lead to bad decision making afterwards. Another possible danger of the car is that it is technology. What if someone hacks into the device and messes with the programming or the destination? Also, someone could easily break into the drivers or passenger’s seat of a car and gain access if the doors are unlocked due to no one being in the front seats. According to a report done at the University of California Berkeley, “While self-driving cars have the potential to improve safety and increase quality of life, many people appear reluctant to adopt the technology, because they are uncomfortable with safety, liabilities, and control.” (Dai, Howard 2.)

The final cause for concern when dealing with the robotaxis is the cost. Not only are the corporations spending more time, resources and money on these cars, but that means consumers must be willing to do the same. “As of 2013, the autonomous driving system costs about $150,000.” (Dai, Howard 6.) This is a very steep price that most don’t have just sitting around. The average Uber ranges anywhere from $10-$20, This means the robotaxi will be way more expensive than to complete the same exact service. “Assuming current market conditions hold, we estimate that using a robotaxi will cost consumers nearly three times more – on a per mile basis – than owning an older vehicle.” (Hernandez, Nunes).  Uber has also proven to be unreliable when it comes to the robotaxi business. A woman was actually killed in 2018, when an operator of the driverless car was distracted, and fatality occurred. “Elaine Herzberg, 49, was killed when an Uber-owned self-driving car – operating in autonomous mode – struck her as she crossed a road in Tempe, Arizona, on 18 March 2018. In the car was safety driver Rafaela Vasquez who, according to investigators, had been streaming a TV show on her mobile phone while behind the wheel.” (Lee). Which is just one of many examples of the unreliability and concerns these cars present.

Another key factor relating to the unreliability of robotaxis is one that is out of anyone’s control: the weather. Again, despite technology design to help the automobiles in rain and snow, how will they react to hydroplaning, or how will they be affected by other drivers being impaired? They possibility of snow can cover up key focus points for the machines such as the painted lines on roads and reflectors, causing the car to lose a bit of control.” Rain, sleet,  snow and fog are challenging enough for human drivers, but adverse weather conditions pose an extra level of difficulty for those developing self-driving cars. These vehicles depend on cameras and sensors to ‘see’ the road and make the correct decisions at rapid speeds.” (Foerster).

Despite technological advances, self-driving taxis will be ineffective, due to the cost, lack of reliability and the slow reaction times. All new technological developments aren’t perfect, however when it comes to driving and being out on the road, one costly error can lead to the worst endings. The risks of taking a taxi are high enough, taking one without a driver, puts unnecessary stress, money, and danger for such little reward. This is a situation where other solutions are vastly available, and the risk doesn’t outweigh the reward. We still have more time to develop even newer and greater technology, to get to the point where eventually these concerns won’t matter. But until then, the self-driving taxi is a dangerous idea and a disaster waiting to happen.

Gibbs, Samuel. “Self-Driving Cars: Who’s Building Them and How Do They Work?” The Guardian, Guardian News and Media, 26 May 2016, www.theguardian.com/technology/2016/may/26/self-driving-cars-whos-building-them-and-how-do-they-work.

Nunes, Ashley, and Kristen Hernandez. “The Cost of Self-Driving Cars Will Be the Biggest Barrier to Their Adoption.” Harvard Business Review, 31 Jan. 2019, hbr.org/2019/01/the-cost-of-self-driving-cars-will-be-the-biggest-barrier-to-their-adoption.