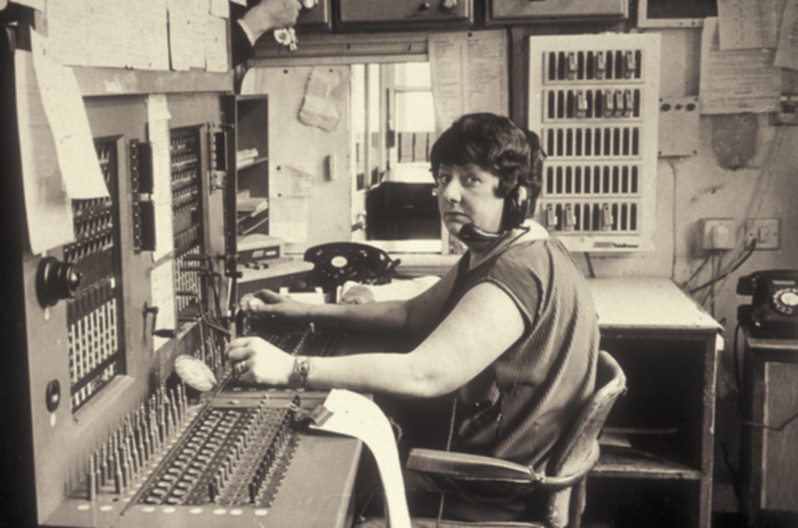 “Hospital switchboard, 1970s” by liverpoolhls is licensed under CC BY-SA 2.0

I want to examine the use of advanced technology used in surgeries today and how technology can create major physical and mental changes to the body. With more and more technology coming out on a daily basis, it makes sense that more unique technology has come out for medicine and procedures today. There has been so much progress when it comes to technology in general and especially when it comes to the technology used in hospitals. There have been many advancements in the robotics used in surgery and used in the everyday practice used at the hospitals. The use of robotic hands in surgeries and the new ways in which blood pressure and pulse are taken for patients has been altered in the past 10-30 years. Along with robotic hands comes new technology that can be used by nurses and physician assistants and aids just to make patients more comfortable. Though, with all of the new technology coming into hospitals also brings the controversy of how much robotics is too much when it comes to human contact in places where it may be needed most. There is also the perspective of how helpful, yet detrimental the overuse of technology can be. We will take a look at the physical and mental effects that technology has on our everyday lives. This involves the strain and toll it can have on our bodies and how it adds radiation to our lives. We will also take a look at the new technology being presented in hospitals and how it is being judged by the public, the doctors, and the patients. Some believe the added technology leads to fewer [NS3] imperfections and more precise work. Others believe that the use of all the technology is detrimental and takes away the sympathy and empathy of having a true human care for someone at a hospital. There are polar opposite opinions when it comes to added use of technology in hospitals. Surgeons and everyday people may have different outlooks on the idea of these technology advancements. The overall use of advanced technology in society will be discussed as well as how it has affected society overall as a whole.

The use of technology has been seen and judged in so many different ways. In a sense, people believe that technology can be one of the most useful advancements in this world today. And how we are finally using technology for what matters most, helping the sick and ill. Those that believe this also believe that the more use of technology leads to fewer common mistakes being made when a patient is in surgery or a simple procedure. Some believe it makes tasks the most accurate they can be, which may put people at ease. Technology can be used for the simple task of looking a definition up on the internet. Though it can also be as difficult as performing an invasive surgery on a patient. Or in between for the use of taking the heart rate and blood pressure of a patient in a hospital. No matter if society is overusing or not taking advantage of the technology today, the use of it can lead to a more precise and focused society, depending on the task and risk of the usage.

Some judgements that technology in hospitals has been hit with include the overuse of rehearsed and prepared simulations for students to react to and help in. Some say, “Medical schools rely too much on simulation technology to teach medical students, a leading academic has warned” (British Medical Journal). This could be because of the lack of human to human contact that is present in those teachings and would give students a more real and honest hands on experience with real people. Without actually being physically present in everyday emergencies, it grows controversy of how it really prepares them for the real stress of being involved in a life or death scenario. In the real world, students will not have rehearsed and structured scenarios occurring, they will have very advanced and unpredictable situations and issues occur.

Some other issues with all the advancements in technology for hospitals also has to do with the fact that a majority of the smaller hospitals do not have the adequate resources to use and own the new technology. For example, “the challenges of adopting and implementing a new technology in a small hospital with limited resources cannot be overstated, as new advanced medical solutions require significant investments from the hospitals” (Mikhailova, 2018). With hospitals having all these new advancements, the smaller hospitals could suffer and not be able to carry out all the procedures and medical treatments they need. In the future, this could grow to an even bigger issue in the thought that companies may focus more on robotics and not produce as much simpler equipment for the hospitals that are still using the physical tools rather than the modern day robotic and computer-controlled technology. Though with the growing popularity and study of robotics in today’s society, the prices and resources for these robotics may decrease significantly and be more financially reasonable for the smaller hospitals.

With all of the judgement that the advanced technology is hit with, robotics in surgery have truly rebuilt the thought of some surgeries carried out today. Marescaux wrote that, “robotics and computer sciences have produced innovations to augment the surgeon’s skills to achieve accuracy and high precision during complex surgery” (Marescaux,1).  This shows how surgeries are able to be more precise and give less room for the error of a typical surgeon. Marescaux also went on to describe that, “similar to aeronautics and military equipment, surgeons have been provided with tools conferring capacities that can replace the lack of physical palpation to identify target structures, surgical planes and resection margins” (Maescaux,1)). The more accurate techniques of surgery are able to be carried out in a less invasive and physically draining way. As said the addition of this type of technology would result in faster healing times for the patient and a much less painful recovery as well, with the decrease of harm done to the body to reach the target of the surgery, due to less of an invasive approach. The future of surgery could truly change for the better with less of a chance for mistakes and lower risk factors for a more invasive surgery.

Another aspect of the robotics in surgery is brought up in, Robotic Surgery, whichfocused on the use of the technology of the da Vinci system. This is also known as the robotic hands of surgery. This robotic technology is used “for stable and precise navigation, ergonomic handles reproduce human hand movements more intuitively using Endowrist technology. Improved ergonomics and dexterity are obvious” (Marescaux, 2).The use of a surgeon controlling the robot from a set aside place during surgery, enables the robot to perfect the movements and also still allows for the surgeon to be in control. The surgeon basically has his fingers in holders that move seamlessly with his actions and carry them out more precisely. This eliminates the fear of the computer taking over and performing tasks unknowingly. Though with the use of computers in surgery, there also comes drawbacks to the advancements such as lack of force feedback. The force feedback is the computers decision of what is real world controls, smaller movements could be harder to identify to the robot and could lead to possible issues.

In The Times of India, they studied the use of robotics used in post care treatment and they found that, “the advantage of opting for robotic physiotherapy treatment is that robots can adapt to an individual’s state very easily, provide specific feedback to patients to enhance their movements and record movement data such as position, velocity and force, torque of joints” (The Times of India, 1). They also found that with using the new robotics that the time of treatment was decreased by a huge amount, 50%, this compared to the normal treatment methods carried out. This may also help lessen the costs of all the aftercare since a patient would not need to be in treatment as long as they would have been prior to the new advancements. The treatments were also seen to be even more precise and had a greater focus of the injury itself. The more personalized the treatment, the more progress will most likely be seen in that specific area. Whether people want to use the discovery of this new technology or not, it is very apparent that the additional use of these newfound treatments can better the lives of patients and cut down the stress of their caretakers. This approach would be taken for a patient that is okay with a smaller amount of contact with helpers in their post hospitalization.

Though robotics sound amazing when used in surgery, there are many disadvantages when it comes to robotic surgery, which should be pointed out. There are higher costs that come along with the very modern technology, which can cause some of the smaller hospitals to fall behind due to their lower amounts of income year to year. This then sets back to progress of smaller hospitals and puts the workers and patients at risk. There are also longer amounts of times to prep the computers and align them with the specific patient going into surgery, to ensure that all computers and pieces of equipment are up to date and are working to their full extent. What may scare the public is if the technology were to have a glitch or malfunction that was not preventable. Though as more robotic use is taking place, there could be a lot of progress in this aspect, as surgeons are becoming more comfortable with the resources and have many backup plans set in place for these instances. With more and more robotics coming out for different types of surgery, it would be considered that the prices for these materials will slowly decline with it becoming more normal and more relevant to society, like all technology.

There are now new advancements in hospitals that now use monitors to check one’s blood pressure and heart rate instead of a nurse or doctor doing it themselves. The use of the monitors gives a more accurate and precise reading for the patient while the nurse or doctor could have mistaken their results when doing the measurement by hand rather than through the monitor. Some would rather go old school in fear and anxiety that the computer can malfunction or become inaccurate, though there are always back up plans

It is obvious that the technology in hospitals today is very helpful to staff and patients alike. The idea that a robot and or other computerized machines, can add to the quality of treatment and post-treatment, increases the confidence in today’s society. Though with technology does come with drawbacks that could be life threatening or just minor issues. People believe that there has been overuse of some aspects of technology. This means that through practice of the use of it, it can add an unrealistic mentality for going into actual practice of the tasks students must complete in real-world settings. Overall, the addition to highly advanced technology in surgeries and procedures, or even in day-to-day technology in hospitals has changed modern medicine. And as we know it, it will continue to alter medicine, in the years to follow in hospitals and other special care facilities.