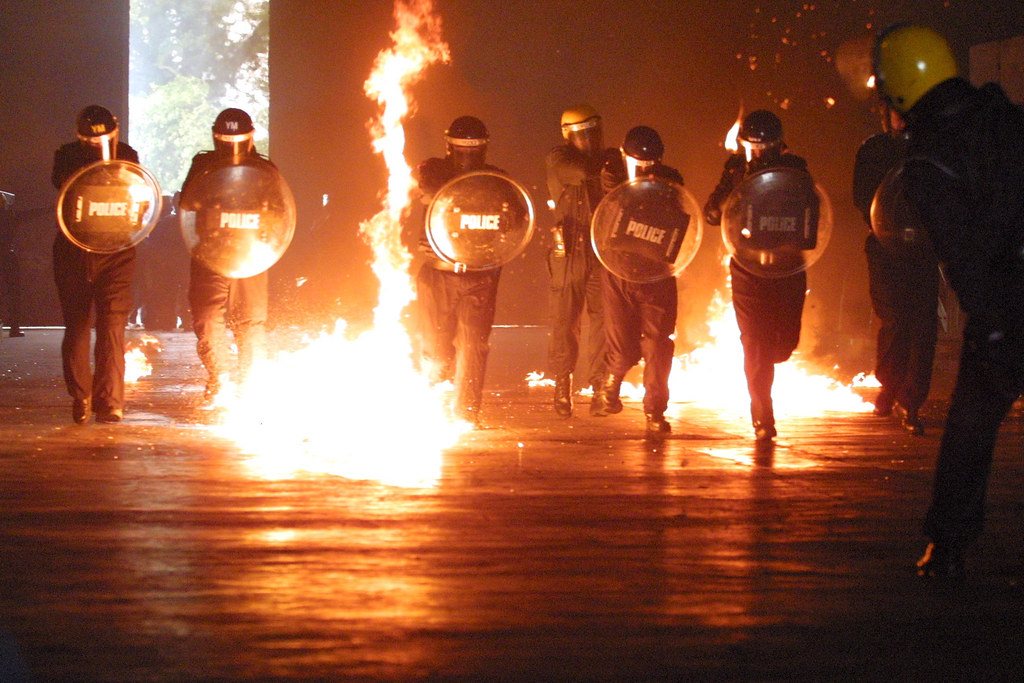 It was January 1, 3033; the ball had just dropped. Justice was looking around for his wife but could not find her. He was at his best friend Mark’s house; they both are state cops together, so they have known each other for a long time. Mark was at Justice’s wedding and was even the best man. Justice could not find his wife, so he kept looking for her. He would open every door he passed by and nothing till he came across the last door, but that door was Mark’s bedroom. Justice opened the door and in the room were his wife and Mark. Justice was furious so he took off. When he got home, he packed all of his clothes, took his ring off, and got in his car, then drove to Detroit, Michigan.

Justice went to the police station and asked the chief of police if he could join his police force. The chief welcomed him with open arms due to the facts that Detroit was very high in crime and they were down in men. The chief was also starting a new program and what better way to test out the program than to test it out on a new man. The new program would be to have robot dogs instead of real dogs. The “dogs” would be able to have heat sensors so they can detect human bodies in buildings. They can also call for backup and have guns on them so they can help their commander. Justice called his dog Lucy, because he got sick of calling it 001. He went into many near death experiences with Lucy.

One night, Justice, the Chief, and Lucy went into this house and these gang members started to shoot up the place. Lucy only detected three men, but there were four. The extra man was standing behind the other so Lucy couldn’t detect him. Lucy killed the three and was about to leave when the fourth man came out of nowhere and started to shoot at her, and he hit her chip and killed her. As soon as Justice saw the screen go black, he was mortified and was outraged so he stormed in there and started shooting. He hit the gang member five times in the chest. When Justice knew everything was safe, he went over to Lucy and broke down. Lucy had saved his life more times than he could count. His chief came up behind him and told him to go home and take the week off.

While Justice was off, he worked out and got into shape so he can get back out there and help more people out. On Monday morning at 8 am he showed up at the office. The chief called Justice into his office and asked him if he wanted to be a part of this new program. At first Justice didn’t know whether to say yes or no. He was very skeptical, because he grew an attachment to Lucy so he was scared he was going to grow an attachment to this new one. The chief promised he would help him not too. Justice finally agreed to it. The chief told him he will be working with human robots. Justice was speechless. In his mind, he took it back. He didn’t want to. He saw the movies and he knew what happened, but he didn’t want to seem like a coward so he smiled and told the chief to bring it on. Justice refused to give it a name; he kept calling it 01. He hated the robot, he wished he could give it back every day. Justice would fight crime with 01, but Justice never trusted it like he did with Lucy and it showed in his work.

One night it was down pouring and all of the Detroit police were there. They were about to do a drug bust, so they sent 01 to sweep through and see how many people were there.

01 detected fifty-nine people, but the chief thought that was way too high so he called 01 back and told Justice to turn him off. Justice tried to talk to the chief but the chief didn’t want to listen. The chief made his comrades storm the building and open fire if need be. Justice had an uneasy feeling in his belly, but the first rule you learn in the police academy is never defy your chief.  Justice went into the building with his chief and fellow officers and it got ugly real fast. There were bullets flying left, right, high, and low. Justice tried ducking and rolling and running, but they just kept coming. He could do anything. He yelled for help but there was no help. The only help he could get was 01, but he dropped the remote when he rolled. He quickly rolled to the remote and did a flip backwards just in time to avoid a bullet going past his head. He turned on 01 and pressed the help urgent button. 01 came flying into the building and started shooting, Justice started seeing bodies fall. He could not believe that a robot is saving the day and he had to rely on him or else he would be dead. One of the drug moles had a bomb and threw it towards Justice, but 01 saw it happen and came running over and put his body in front of the blast just in time to save Justice’s life. 01 has this steel that can withstand any blast. The robot then shot the man and told Justice no more bad guys. Justice stood up and looked around, all he saw was blood. He saw so much blood that it looked like the walls were painted red. There were so many bodies as well he could not believe it, he was sick to his stomach. He could not take seeing all these bodies and blood anymore he took off running.

01 was following Justice till he collapsed on the ground. 01 didn’t know if Justice was hurt or not. When Justice got up off the ground, he looked up at 01 and thanked him and then got in his squad car and drove to the station. Justice sat in his chair and just stared at 01. He whipped out a camera at his desk and started to record. He told the whole story as to what happened, he did not miss any details. After he was done, he wrote a note saying that he sorry he cannot be here for when the FBI comes. Justice knew he could not be there when they got there. He got in his car with 01 and drove. He had no destination in mind he just took off. He finally got tired of driving so he stopped in this small town in Minnesota. The small town was named Hazel Run. Justice slept in his car for two months afraid he would be found. He finally bought a plot of land and started building a house by himself. He lived in that house with 01 who he named Eve. Justice was sitting by the fire working on his computer, while the news played in the background. The news was talking about the bank robbery and how they want to thank Justice and 01 for being heroes. Two days later there was a knock-on Justice’s door. Justice got scared so he ignored it and went back to typing on his computer; he was writing a book. The sheriff of the town yelled at the door stating his name and what he wanted. Justice got up and opened the door. The sheriff wanted to thank him and ask him if wanted to be an officer. Justice graciously took the offer because he knew deep down, he loved helping people and that he was a good police officer. He makes the world a better place and he knows deep down that it is his duty to protect and serve.

Justice knew he had to change Eve from a simple robot to an artificial intelligence chip. He knew it wasn’t going to be easy, but he was doing a lot of research. He wanted Eve to have feelings. He wanted her to be able to have the chance to grow and be able to do what she wanted. Everyone in the town loved Eve. They weren’t scared of her, they would welcome her into their stores to get groceries, parts, or even books for Justice. Suddenly, the sheriff appoints Justice his position and then the old sheriff dies of cancer.

Justice took the sheriff position and the worst thing that happened in that town was parking permits. It was nothing like Detroit. He often thought about what his life would be like back in Detroit, but then it would stop because he got sad. He missed his old chief and his old officers. He thought about the blood and the bodies all over the floor. He missed Lucy. But deep down he was very satisfied with the life he made in Hazel Run with Eve. Did he miss his wife, for sure he did? He thought about her every once and a while, but then he remembered what she did and he is glad she got out of his life. Justice also missed Mark, but Mark was a backstabber. How could a best friend sleep with his wife, he was still trying to figure out. Justice is mad about what he has witnessed, went through, and had to overcome. Even with all that anger he is happy that he gets to spend his life with Eve in a small town as a sheriff. Justice is starting to put together another robot dog but with artificial intelligence, so Lucy 2.0 will act more like a dog then have to be controlled with a remote control. He missed his Lucy so much that he needs a new and improved Lucy 2.0 to be his pet. He wanted Lucy 2.0 to run around in his yard while Eve threw the ball and Justice watched. While Eve was throwing the ball for Lucy 2.0, Justice got a call. Justice had to go take care of the crime scene, when he arrived on scene, he saw that it was Mark. He did not understand why he was here or how. After all the paperwork and the coroner took him away Justice went home. When Justice entered the house, he could tell something was off. Lucy 2.0 did not come running up to him and Eve did not greet him at the door. When he turned on the light there, sitting on the couch was his wife, Susan. She looked at him and smirked and then pulled out a 2mm Kolibri and shot Justice in the chest.