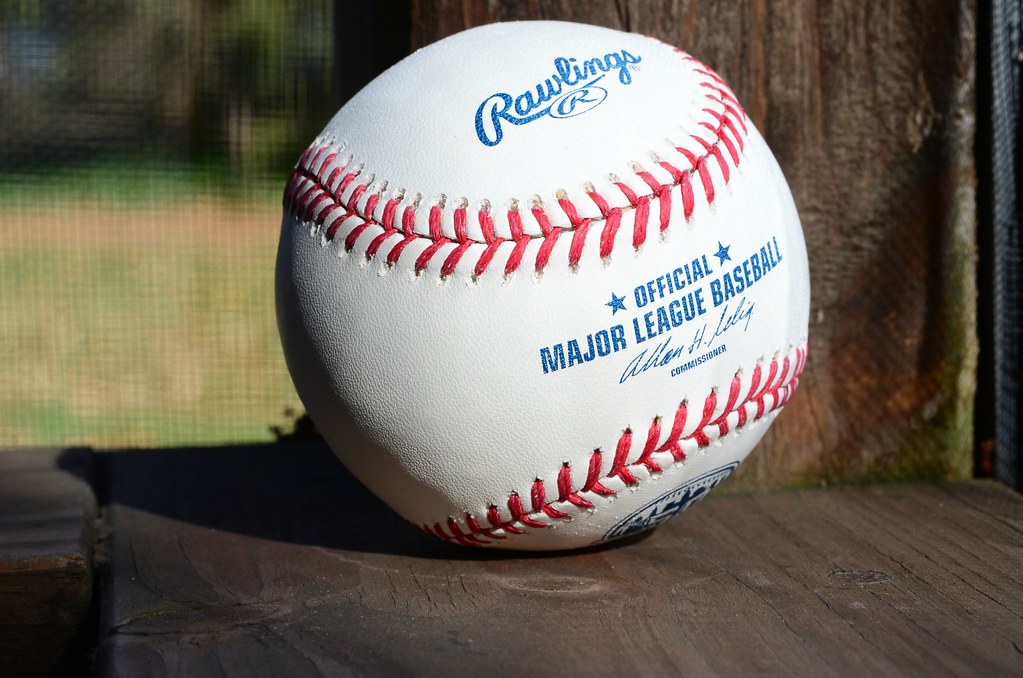 “We Have Passed the Baseball Equinox” by slgckgc is licensed under CC BY 2.0

Most people would tell you that baseball just involves a pitcher throwing a ball and a batter hitting it, but they do not realize how much science is actually behind it. Since the invention of computers, most people thought about baseball with this mindset, but now the game is looked at from more angles than anyone could have ever expected. Thanks to computers the game has continued to evolve in an absolutely unbelievable amount of ways. In this paper, I will explain how computer technology is revolutionizing the game of baseball by providing examples of what it has done so far for the game and what plans are still in store for it in the future.

Computers have completely revolutionized the way that baseball is advertised to the public. Back in the day, you would need to find the nearest store to pick up a newspaper and catch the Yankees score from yesterday when Babe Ruth had three Home Runs and Lou Gehrig swiped second base off the Detroit Tigers (Hughes).  Nowadays, all a Yankees fan needs to do is turn on their television where ESPN will be talking about the game from last night. Baseball also has many forms of commercials used to display the stars of the game to the fans. For example, most teams create hype videos to get the fans excited about the upcoming season or the playoffs (If the team was good enough to get there). Without video editing technology, these videos that get the fans of the sport ready for the season would not be able to be created. Also, the creation of the internet has led to teams being able to really put their name out there. This is done through various ads that can be attached to internet pages, and most importantly social media. Social media has completely revolutionized the way that people view sports teams. I know in my own case, that I sit on my phone all day and wait for the “BREAKING NEWS: …” headline more often than not. It also allows a way for teams to really connect with their fans. For example, most teams do giveaways throughout the season to encourage fans to come to games and buy various types of merchandise. Lastly, computers have changed the way that baseball is advertised through video games. The MLB has a game called MLB THE SHOW, where fans can decide to create a player and play their big-league career, play a quick post season mode where than can lead their team to the World Series, or even rebuild their favorite team to create a dynasty that will be unbeatable for the years to come. Creating a game like this can potentially make new people become baseball fans as they learn more about each team and player, I know that was the case for myself as playing MLB THE SHOW 08 led to me becoming a die-hard Yankees fan due to my love for Derek Jeter.

Technology has also changed the way that players are recruited and how their statistics are being tracked. Coaches and organizations have begun to use different types of technological tools to tell us different things about all aspects of a player’s game. For pitchers, coaches have started using a device called the Edgertronic SC1, which focuses on the pitchers’ hand to see how the ball is released to detect the different spin on pitches. Edgertronic systems do this by capturing videos at 1,000 frames per second. The device uses this video to then take a closer look at the fingers of the pitcher and the spin of the baseball, determining the spin rate (Lemire). Another device that is called a Rapsodo, provides coaches and players instant results on many different metrics of a pitch including spin rate and velocity. This device allows coaches to see what players need to work on in order for them to create their perfect pitch (Verducci). The Rapsodo machine allows players to create their perfect pitch by using a camera located behind home plate. The camera has a radar built into it that begins to pick up the spin/movement of the pitch and signals the camera to begin taking a series of photos. Using both the information from the radar and the camera, the Rapsodo machine can pick up the spin/trajectory of the pitched ball (Taylor). There are also many types of technology that have been put into use to analyze a hitter’s swing. Many coaches have started using a product called Blast Motion. This comes with a sensor that hitter’s put on the knob of their bat and a required phone app to get metrics of the hitter. When the recruited player is hitting, the coach can take a video of them on the Blast Vision app, which will then tell him the statistics of the batter’s swing after the ball is hit. Statistical categories being tracked on the app include exit velocity, ball speed, launch angle, carry distance, and total distance (Blast Motion). Computer science has also had a major effect on how some players an get their ability seen by coaches. For example, if a player is unable to go to a showcase and get their statistics like the ones mentioned above seen by coaches, they can just use video editing to create their own recruitment video and send it out to coaches they are interested in. There are also many different recruiting websites that prospects can post these videos to if they do not have access to a coach’s contact information. A main example of a website where players can post their stats and videos is called MaxPreps. This website is widely used by many high schools around the country and I can vouge for it, as my high school baseball team has used it in the past to post our stats for coaches to see (MaxPreps). I am sure that this type of technology was huge throughout the COVID-19 pandemic as players and their families were unable to travel around the country for showcases and other events. Finally, technology has had an unbelievable impact on how coaches can get in touch with players and even other coaches during the recruitment process. For example, a coach can use social media, email, or even a phone call to get in touch with a player they had interest in at a previous game or showcase. This has also allowed coaches to broaden their horizon and recruit many players from international countries as well as those in the United States.

There are also many current uses of computer technology in the Major Leagues. The main one is called Statcast. Statcast is a tracking technology that collects a various amount of data for baseball games. In 2014, the MLB did a trail run with it in some ballparks and once it was proven successful, it was installed in all 30 stadiums in 2015. At this time, Statcast was composed of many different radar systems and cameras installed across the stadium. However, last season the MLB introduced Hawk-Eye, which offers better tracking ability than that of the previous cameras and radars. Each of the MLB stadiums have 12 of these Hawk-Eye trackers, where five of them are focused on pitch tracking, and the other seven are focused on tracking hitters and their batted balls. Statcast is used for people to look and see specific measurements on every play in a baseball game. Statcast can track arm strength, distance covered by a fielder, home to first time, exit velocity, launch angle, distance of a baserunnner’s lead, pitch velocity, a catcher’s pop time, the spin rate on the pitch, expected batting average, and a few other statistics. By tracking these statistics, the television broadcast of a game can use the measurements gathered to show a diagram of how far a ball traveled to give the fans at home a real feel for how hard a ball was hit or how spectacular a play made really was in the moment (MLB). In 2015, the MLB also added new pitch clocks into stadiums. After receiving many comments about how games are boring and take too long, the MLB created these clocks to speed up the game for viewers as they allow for 20-seconds in between each pitch. Finally, for the most important piece of technology in sports, Instant Replay. Instant Replay allows for major changes in calls to be made during a game. When there are close plays at the plate to decide a game, or even a basic call on if a runner should be out at first base, instant replay can be used. As I previously mentioned, every MLB ballpark has many cameras around it for use during the games. These cameras used for replay can be a complete season changer for teams if a call is ruled in their favor or unfortunately out of their favor. In June of 2010, pitcher Armando Gallaraga had a perfect game going until the final out of the game in the 9th inning. Unfortunately for his cause, the umpire ruined it for him by missing a call on a runner that should have been ruled out at first base. At the time of this event, Instant Replay was not yet in baseball and the umpire was unable to reverse this call, erasing Gallaraga’s perfect performance from the history books (Jugs Sports). Is this event occurred today, the home plate umpire would have been able to go “Under the Hood” to review the call on the field. When doing this, the Umpire gets to look at the play on the Jumbotron in the stadium and puts a headset on to be in contact with the Replay Command Center, located in New York, where a rules advisor will help the umpire resolve the on-field call (MLB).

As for the future of computers and baseball, the MLB is looking to add in robotic umpires that use Artificial Intelligence to make calls on baserunners. The league is considering doing this because of calls that have been crucially missed in the past, like the one I have previously mentioned in the paragraph above. The main way that the MLB is planning on introducing these umpires is by using a radar system to call balls and strikes. Using a system like this would allow for 100% precision in a call being made. This system is going to be tried out across minor league baseball this season to test if it will be sufficient for use in the big leagues. However, as for now, there is no direct indication that field umpires and even the home plate umpire will be replaced anytime soon, but once this change inevitably occurs, it will change the way that baseball is played forever (Fouché).

To conclude, many people that see baseball as just a game of hitting and throwing a ball do not realize how much actually goes into every pitch. The evolution of computer science inside the game of baseball has truly revolutionized the sport. From advertising to fans from all across the world, giving international players opportunities they ceased to have, and going from having little to no understanding of the different measurements that go into a single play, and even making it so humans do not need to make crucial calls on which team will win a game, computer science has completely changed America’s Pastime.

Rayvon Fouché Professor of American Studies. “Robo-Umps Are Coming to Major League Baseball, and the Game Will Never Be the Same.” The Conversation, 19 June 2020, theconversation.com/robo-umps-are-coming-to-major-league-baseball-and-the-game-will-never-be-the-same-132640.