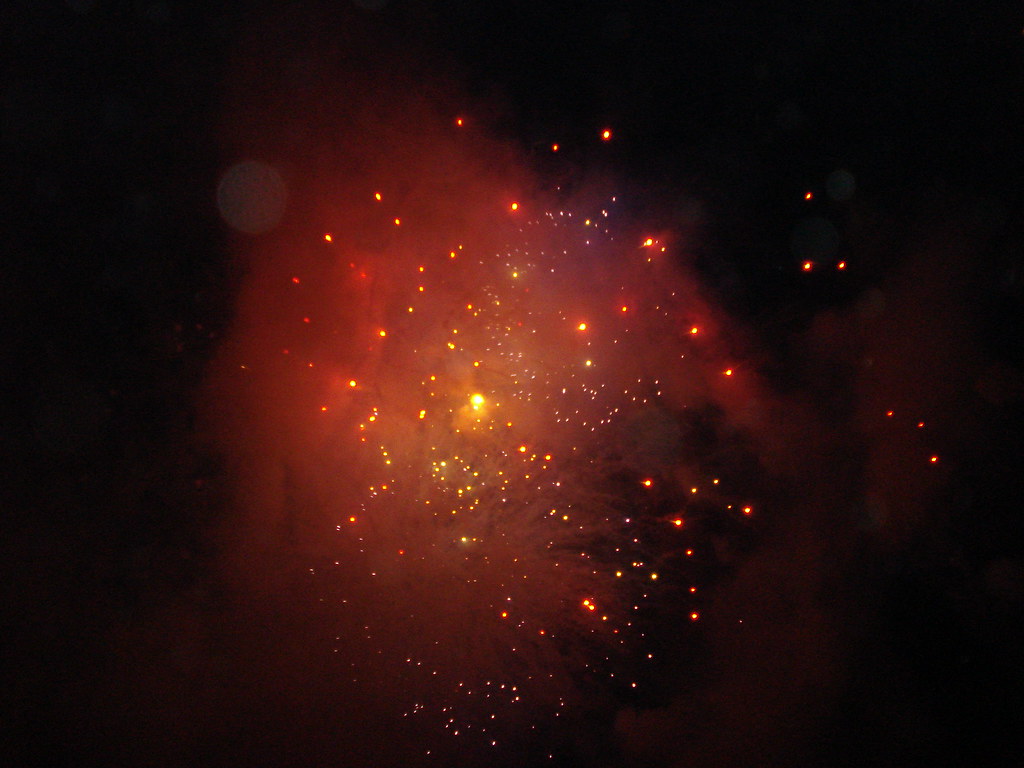 Space. It’s cold, empty, vast. But beautiful, lively, and warm at the same time. I can see billions of small, twinkly bubbles from where I’m sitting. I wish I could see Proxima-b. All we know about the distant planet is that is is Earth-like and uninhabited by intelligent life such as ourselves. We’ve lived on Mars ever since I can remember. I hate it. It’s warm during the day but chillingly cold at night, like -100°C cold. Life on Mars is miserable; we have to wear stupid masks and sleep in unique structures to protect us from the extreme cold. Anything would be prettier than the ugly oxidized iron-colored dust that covers Mars.

One would think that if we have the technology to successfully time travel, then we could manage the voyage to Proxima-b. I mean, scientists figured time travel out over two hundred years ago, and we have had the technology for interstellar travel for almost that long. I learned about it from my father. He is a cyborg who was apparently born in 2000. He has only lived so long because he melded his brain with artificial intelligence as part of a government experiment. He stays youthful because of a serum developed during World War IV, which was meant to create super soldiers. Only in his case, he no longer feels pain nor age. But no one can figure out how to make this desolate wasteland look a little more “lively.” Sure, we have terraformed the whole planet, but it is not the same as the real thing.

Proxima-b has real trees, and the ground is covered with green grass and blue seas. Nevertheless, the trip to Proxima-b is dangerous. The only known path to Proxima-b is through a nebula over four light-years in diameter. Nebulas are hazardous to navigate because of the intense heat, radiation, and the possibility that a new star will form precisely where you are and melt the ship. Many have attempted the journey, and all were met with brutal deaths as their ship melted around them, and they suffocated due to lack of oxygen.

Today is the day I finally make the trip. Odo and Zyla will be accompanying. Odo is around my age. He has a Ph.D. in astrophysics, and we attended Space Force training together. Zyla is older than both of us. She has a Ph.D. in mechanical engineering and is best known for her contributions to the Space Force during World War III. Our mission is to successfully navigate the sixty-light-year trip to Proxima-b and be the first to document its surface. I am coming along because I designed and engineered the ship we will be taking. No one has the knowledge of the ship that I do. It is capable of warp speed, allowing us to successfully arrive at Proxima-b in approximately two years. If the nebula was not in the way, it would take half that time because we must reduce speed when traveling through the nebula. Nebulas are beautiful sights that will end the mission if one comes too close.

We have been preparing for this day for years, ever since we joined the Space Force. We always wanted to accomplish what others said couldn’t be completed. This was always my dream because of my father. He always supported my endeavors. Our goodbye was short but heartfelt. I couldn’t say that I might never come back.

But, as we walk up the stairs to enter the cockpit, I can feel a lump in my throat and a voice in my head that wonders if we will end up dead while trying like the rest. I am exhilarated and terrified at the same time. The three of us take our seats in the cockpit. Zyla and I are at the front to monitor the systems while Odo is behind us and will advise us throughout the trip. The control panels are glowing brightly as the systems are engaging and we prepare for takeoff.

General Salix’s harsh voice rings in my ears as they through our communicators, “All ready to go up there?”

I answered, “Yes, General. You may proceed with the countdown at your discretion”.

The General begins the count. Sixty… Fifty-nine… Fifty-eight… The ground starts to shake beneath us as the 500,000 gallons of fuel begin to ignite. Thirty… Twenty-nine… Twenty-eight… I look up at the sky as the smoke from the engine mixes with the rust-colored dust and begins to obstruct our view out of the cockpit. Five… Four… Three… Two… One… Detach supports and commence liftoff. We are finally moving. The thrust caused by takeoff presses me to my seat, and I can not remove my eyes from the beautiful sight above. The vast, dark area lined with little glittering stars and planets; it is gorgeous.

“Are the coordinates locked in?” Zyla asks.

“Yes, calibrate the systems and initiate warp speed,” I answered.

Zyla responds, “Systems are calibrated and we will commence warp speed in three… two… one”. She pushes the final button, and the space around us becomes distorted as we begin traveling at the speed of light.

Now, all we have to do is wait until we arrive at the nebula. We will take that challenge when it comes. I will be in charge of steering. I am not sure if I am up for this. I do not think I have much of a choice.

Our systems audibly alert us that we are approaching the nebula. We drop out of hyperspace and are confronted with the giant orange, red, and purple nebula known as N-23984. I hear Oro gasp at the sight of its beauty and vastness.

I announce to Oro and Zyla that we will now begin the trek through the nebula. The nebula is mainly made up of gases released by dying stars. And by the size and color of this nebula, its star must have been a red giant. The danger of nebulas lies in the fact that many new stars form within nebulas as the gases constantly collide together and eventually form a center of mass. I skillfully navigate larger groups of dust while a sensor in the rear part of the ship continues to collect samples of the gas particles for later examination. It will help us to determine the nebula’s age, what kind of star formed this nebula, how old the star was, and maybe find if any exoplanets were once in this space now occupied by the nebula.

All seems to be going well until the external sensors indicate a rapid spike in temperature in the nebula, which can only be caused by one thing, the formation of a new minor star. I bank left in an attempt to avoid the newly forming star. An emergency siren begins sounding, which makes it nearly impossible to hear anything. The light and heat radiate so quickly I fear that our ship may become engulfed.

Zyla exclaims, “Are you out of your mind? What if we run into another star? Our death will be much more painful than if our ship is destroyed by the star!”

Oro, remaining surprisingly calm, says, “We are only one-eighth of a light-year away from the end of the nebula. If we make the jump now, odds are we will not run into any more stars. I am the astrophysicist here, please trust me.”

Zyla reluctantly complies as our external thermometers indicate our ship will take critical damage if we do not move away from this star. The loud siren-type indicator is enough pressure to force our hand. As the ship makes the jump, I catch one final glimpse of the red and purple hues of the nebula.

“I set the ship to drop from hyperspace after we have exited the nebula so we can recalculate our trajectory and finish the trip to Proxima-b. Now, all we have to do is wait and hope we don’t die. Time seems to be crawling yet flying at the same time. Zyla, Oro, and I frantically try and get the working order controls since the external damage caused the internal panels to malfunction. We finally have the controls in working order, and Oro alerts us that we may be close to exiting the nebula, that we should get the alert any time now.

Zyla takes us out of hyperspace. We made it through the nebula. No one has ever successfully navigated it. We all breathe a sigh of relief. Oro quickly gets to work on recalculating our jump to hyperspace, and Zyla unbuckles herself and fixes the coolant system, which took a significant hit while in the nebula. I find myself unable to move. I am stuck staring into the void of space, astounded that I am still alive.

The system’s siren finally stops beeping, and I can finally think. As I come to my senses, I unbuckle myself to check the system logs to help Zyla get the ship into working order as quickly as possible. Oro sends a message back to General Salix and her team to let them know that we have successfully navigated to the nebula.

Zyla fixed the coolant system, and I was able to repair the right thruster that was damaged by the star. Oro has calculated the new trajectory to Proxima-b. Zyla programs the coordinates into the computer, and we make the final jump. The next time we drop from hyperspace, we will be at Proxima-b.

We make one final drop from hyperspace. I am taken back by the blues, greens, and yellows that cover the planet.

“We made it,” I stammered. I am in total awe of the beauty of the planet. “I never knew a planet could look so green and alive,” I whispered.

As we enter the atmosphere, I initiate the landing protocol. We landed in what looks to be a forest; I read about forests when learning about Earth. After landing, Oro, Zyla, and I prepare our oxygen suits and gather our equipment. We have cameras built into our suits to document our quest. I am in charge of collecting soil, water, and other samples of life on the planet. Zyla will be studying the lifeforms, and Oro will focus on the planet’s dynamics and hypothesize about how life on this planet came to be.

The moment is finally here, my first steps on Proxima-b. As the rocket’s doors open, a gust of wind hits my face and nearly knocks me over. I hurry down the platform onto the planet out of excitement. This planet is of similar size to Mars because I feel no heavier or lighter. The planet is full of life. Tall, green lifeforms that are rooted into the ground randomly dotted in the ground. Smaller versions of those lifeforms also line the ground, but these have beautiful buds on them of all shapes and sizes.

We walked inland to learn more about this planet’s life and see any intelligent life. We never suspected there would be life on this planet, but there was no way to know for sure until we explored the planet. After what felt like hours of walking, collecting samples, and other data, we stumbled upon a group of dirt mounds with entryways. From out of nowhere, a tall figure appeared. It was a pale green with eyes similar to humans. It stared at us in awe, and we stared back in fascination.

Hawking, Stephen. A Brief History of Time: from the Big Bang to Black Holes. Bantam Books, 2017.