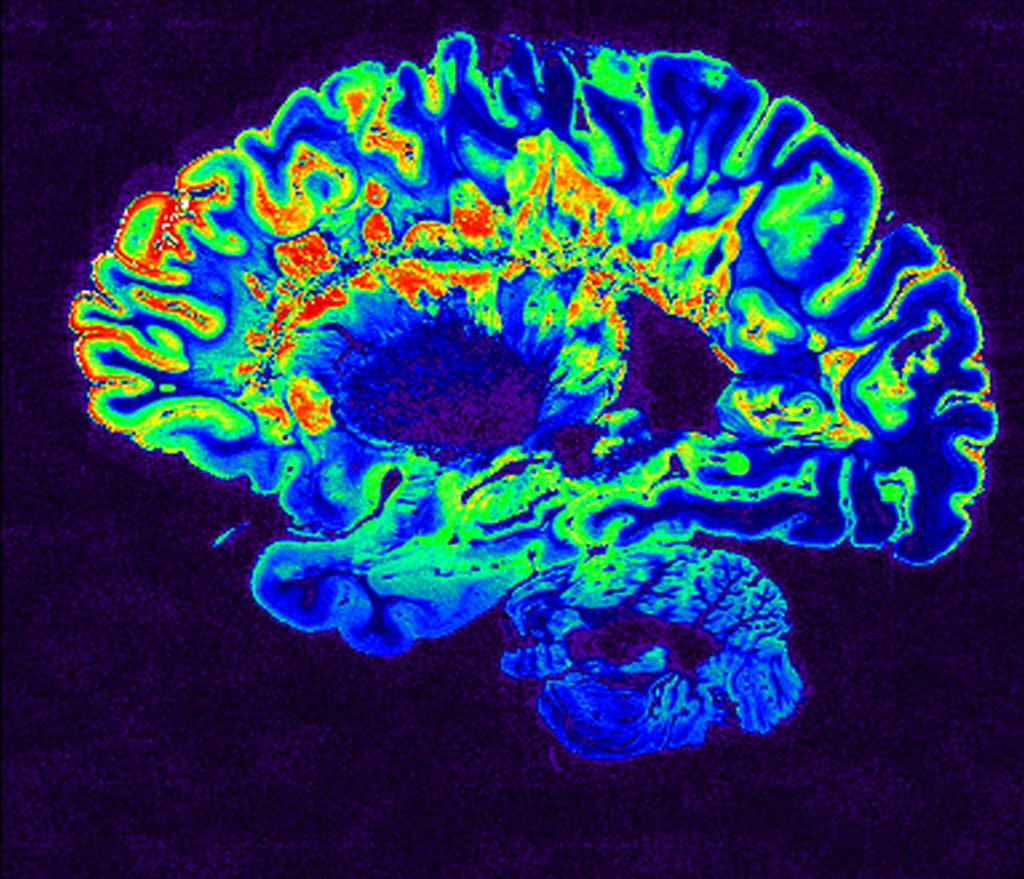 “MRI Scan” by National Institutes of Health (NIH) is licensed under CC PDM 1.0

For many years, mental health disorders were diagnosed by psychologists or psychiatrists by talking to the patient and paying attention to their behavior. This made diagnosing mental disorders quite challenging because there is not a set of specific rules that a mental disorder follows. If someone is easily irritated on a regular basis, that symptom alone could give four different mental disorders. But with brain scanners, like a Positron Emission Tomography (PET), Computer Tomography (CT or CAT), and Magnetic Resonance Imaging (MRI), doctors have been able to use what they learn from the scanners to better diagnose a patient and help them get treatment faster.

When it comes to mental illness, getting a diagnosis is the most important part. Without one, a mentally ill person most likely will not be able to get the treatment that they need; most doctors legally are not allowed to do anything, plus, most insurances will not cover anything without an official diagnosis. However, getting a diagnosis is a huge, challenging process all on its own. A patient has to meet will multiple doctors, psychologists, and psychiatrists just to be considered officially looked at for a diagnosis. According to the National Alliance on Mental Illness, or the NAMI, in order to get a diagnosis, one must first be put through a physical exam and they must be monitored for a long time to rule out any underlying medical conditions. Next, a patient will be referred to a mental health professional, most likely a psychologists or psychiatrist, and they will use the “The Diagnostic and Statistical Manual of Mental Disorders, fifth edition (DSM-5), to make a diagnosis” (“Understanding Your Diagnosis”).  This manual, the published by the American Psychiatric Association, helps doctors diagnose their patients by listing feeling, symptoms, and behaviors that a person might feel. Depending on which kinds of feelings, symptoms, and behaviors they feel, a doctor may be able to give them a diagnosis. In her piece “The Real Cost of Untreated Mental Illness in America”, Mary Ellen Ellis says “According to the National Institute of Mental Health, 51 percent of adults in the U.S. with bipolar disorder and 40 percent with schizophrenia were untreated during a one-year study period”. She goes on to say that the statistics get even worse for any other mental illness. She says that “Around the world, approximately two-thirds of people with a mental disorder go untreated.” These are dangerous statistics. These statistics show how important it is to get a diagnosis, not just for the mentally ill person, but also for society. Ellis goes on to say in her article that substance abuse and mental illness can co-occur and that there are almost 70,300 drug over doses in the United States alone in just a year. Because of this, The National Alliance on Mental Health approximates that the country loses three hundred billion dollars a year on untreated mental illnesses (Ellis). Overall, it is very important for someone with a mental health disorder to get diagnosed, and more specifically, for them to get the correct diagnosis; and brain scanners have made this process much easier.

There are many different types of brain scanners that can aid in the diagnosing of a mental health disorder. A Positron Emission Tomography , or PET uses radioactive molecules to create a dynamic image of internal tissues and organs” (“Pet Scans”). PET scans are especially helpful when looks for tumors because the tumors will be a different color than the tissue. PET scans measure for the level of activity which makes them very useful when looking at brain activity. According to an article from Mayo clinic, there is a clear color change in a person who is not depressed brain verse a person who it depressed (“PET Scan of the Brain for Depression”). In A PET scan, brain activity is detected by a yellow and white color. In the scans of these two people’s brain, the depressed person has significantly less yellow and white color in their brain and more blue color in their brain. This indicates that their brain activity is very low which is a sign of depression. Another type of scan, a Computer Tomography, or CT or CAT scan looks at the structure of the brain in slices. These scans can be done with or without contrast; contrast allows doctors to be able see a specific organ or tissue more clearly. Like PET scans, a CT scan also can look for tumors, however a CT scan also looks for lesions, injuries, bleeding, or structural anomalies (“Computed Tomography (CT or CAT) Scan of the Brain.”). Although both of these scanners can be used to look at the brain, especially for tumors, the type of scanner that is most commonly used to help diagnose mental disorders is a Magnetic resonance imaging scanner, or an MRI. An MRI “uses echo waves to produce pictures of your brain” (“A Growing Use for MRI in Mental Health”). More specifically, functional MRI, or fMRI, are designed to track where oxygenated blood has increased, therefore, doctors are able to see where the most brain activity is occurring (Sitek). All three of these scanners help scientists and doctors better diagnose mental illness patients in difference ways. These scans can not diagnose someone with a mental disorder by itself, it needs to be in combination with a physical exam, sessions with psychologists and psychiatrists, and an overall behavioral/ personality evaluation.

In order to help make a diagnosis, brain scanners use something called a neuromarker. A neuromarker is a pattern or image in a brain scan that shows certain activity, functionality, or dysfunction in the brain. These neuromarkers have been identified to be related to multiple psychiatric disorders (“Using MRI to Diagnose Mental Illness”). According to GE Healthcare, “By 2013, scientists had identified neuromarkers for a variety of mental health conditions in MRI and other brain scans of people with schizophrenia, ADHD, bipolar disorder, depressive disorder and Tourette’s”. The article goes on to say that during that study, computer- aided diagnostics based on brain scans was able to make an almost perfect diagnosis. That it, when only two choices were presented to the system, if a third one was added, the machine could not predict an accurate diagnosis. However, the scientists did more studies and found that the more data that they collect about a specific neuromaker, the better they are about making a diagnosis. But this means taking data from multiple individuals and collecting as much data about a neuromaker as they can; this can be a very difficult and tedious process. But, because of their research, there have been exponential jumps in the way that machines/ computers learn how to process data and information. This means that MRIs and other types of brain scanners have been able to aid more in the diagnosing of a mentally ill individual (GE Healthcare). Because of Functional MRIs, doctors and scientists are able to see what is referred to as a “time series” of brain images. This means that a scan of the brain, which are called “voxels” is taken every two to three seconds which means that doctors get an almost perfect “video” of brain activity. However, because it is not perfect it is hard to make a clear decision whether the image shows a change in brain activity or was the patient just moving. Although there are many challenges when it comes to reading a brain scan, like mentioned before, there are clear differences between a “normal functioning” brain to a mentally ill brain. Depression is the most obvious in many cases, but other studies have been done that study other mental disorders. For example, a study was done of people who had social anxiety disorder. At the start of the study, scans of their brains were taken while they went through cognitive behavioral therapy. During the therapy, these people were shown pictures of people faces with various different emotions. The results of the study showed that people who responded best to the therapy have the most brain activity when they looked at angry faces before undergoing the therapy.  This shows that not only can brain scanners aid in diagnosing mental disorders, but they also aid in the treatment of mental disorders (Sitek). Because fMRI scanners show brain activity, data collected from a scanner can be used to see how people are more likely to develop a mental disorder if their parents have a mental disorder. A study that was done by MIT and Harvard Medical School looked at children’s brains whose parents either had major depressive disorder or did not have major depressive disorder. The study “showed when the fMRI participants were lying in the scanner without an explicit task, the emotion-processing regions were active in similar patterns as the resting state network” (Sitek). This could represent overactive emotion processing which explains why children whose parents are mentally ill are three times more likely to become mentally ill themselves. This is another example of how brain scanners can diagnose mental disorder, even before someone thinks they even have one.

Overall, since the invention and widespread use of brain scanners, doctors, researchers, and scientists have been better able to identify and diagnose an individual who had a mental disorder or illness. All three types of scanners talked about, the Positron emission tomography (PET), Computer Tomography (CT or CAT), and Magnetic resonance imaging (MRI), are able to track brain activity, brain volume, and they are able to take sequenced pictures of the brain to get a better understanding of how each individual’s brain functions. Combined with other types of diagnosing, for example, physical exams, blood tests, psychiatric evaluations, long term monitoring, and many other, doctors will be able to get a clear understanding of what is affecting a person mentally and the best way to help them get the treatment they need. Brain scanners lead to better diagnosing which leads to better treatment, which leads to better functioning people and a better functioning society. By helping just one induvial, doctors and other professionals are helping the world.

“Can You Get a Brain Scan for Mental Illness?” StoneRidge: Center for Brains, 2 Sept. 2020, pronghornpsych.com/can-you-get-a-brain-scan-for-mental-illness/#:~:text=Brain%20lesions%20can%20cause%20a,help%20confirm%20specific%20mental%20illnesses.