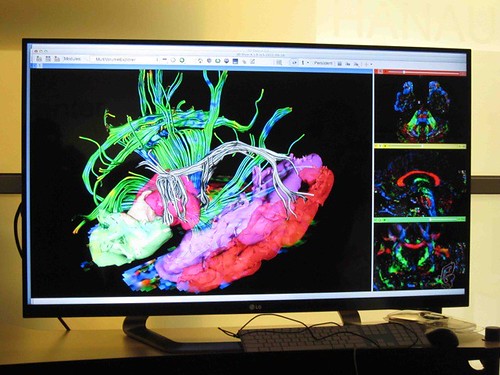 “Allen Institute for Brain Science” by Lavender Dreamer is licensed under CC BY-SA 2.0

Neuroscience and artificial intelligence are two subjects many do not know much information on. They are quite distinct subject matters but have many connections between them. Neuroscience is defined as “any or all of the sciences, such as neurochemistry and experimental psychology, which deal with the structure or function of the nervous system and brain” (Nordqvist).  Merriam Webster defines artificial intelligence as “a branch of computer science dealing with the simulation of intelligent behavior in computers” and “the capability of a machine to imitate intelligent human behavior” (“Artificial Intelligence”). As easily seen, both of these subjects are quite complex in their own manner, and to combine them together make for more complexity. Although, from the definitions of both, it becomes simpler to see where the connections between both lie. These connections between artificial intelligence and neuroscience help accelerate one another.

One of the first major connections between both is that artificial intelligence helps us understand how our brains work. Without the use of some type of technology, it would be near impossible to be able to study our brains and their complex functionality. Artificial intelligence allows for neuroscientists and researchers to build better models to simulate the human brain (Jing). Being able to see the brain as a real-life model allows for professionals to have advanced knowledge of the brain. This improved knowledge allows for professionals to better diagnose mental illnesses. It may also help professionals provide proper treatments to help cure these mental illnesses or help bring them down to milder cases. Neuroscientists can now find and further investigate unknown knowledge of the brain because it is now a real-life object that they can manipulate. They can now learn from the behavior of artificial agents to interpret our brains because it will be at the cost of no human life and can freely change multiple variables. One of the most widely known models used are called neural networks. These neural networks work as “virtual brains” that realistically capture the complexity of our brain. In fact, “if such a system can produce a pattern of neural activity that resembles the pattern that is recorded from the brain, scientists can examine how the system generates its output and then make inferences about how the brain does the same thing” (Savage). These neural networks allow for neuroscientists to test hypotheses and observe results from simulations. Without having this virtual look at brains, neuroscientists would have to go based on information from patients. There will always be a new, unlearned issue encountered and with the help of these virtual brains it makes it easier for neuroscientists to be able to go to a lab with a computer and test different variations without having to physically see a patient and make a wrong judgment. They can now see results before having to make a decision that can expeditiously change a person’s life, because now, they can see a virtual version in front of them besides a picture in a textbook.

Artificial intelligence expedites developments and discoveries in the field of neuroscience. In order for any machine to learn, it must be able to understand and digest complex data. Complex data for these technological machines suitably goes hand in hand with the complexity of the human brain. The signals sent from the brain, in the form of groups of neurons communicating and working together, become especially complex. It takes many different neurons to communicate with each other to achieve a common task most think is simple, like moving your arm for example. The simple task of moving your arm requires 10 million to 100 million neurons in the human brain to work together (Savage). Seeing how these neurons work together without the assistance of some form of technology would be difficult for any person regardless of their knowledge, educational degrees, training, etc. Machines are able to learn and build upon their skills. This ability allows for them to be able to digest and compute very intricate data.  As previously mentioned, the way in which our brain functions is an extremely complex process. The ability for artificial intelligence to compute intricate data allows for models to be built, specifically replicate models of the brain. If these machines never progressed, neuroscientists would not be able to see how our brain functions quickly because there would be no such thing as models on a computer screen. Technology is far more advanced in today’s world than it was many years ago. Neuroscientists are now able to see three dimensional models and how exactly neurons work and move within the brain. Therefore, the progression in machine learning allows neuroscientists to easily see how these neurons in our brain work together because without progression, neuroscientists would have to rely on previous knowledge instead of being able to see a real-life model (Jing).

Another important neuroscience development expedited by artificial intelligence comes in the form of a type of imaging called functional magnetic resonance imaging. Functional magnetic resonance imaging is defined as “measur[ing] activity in our brain by detecting changes in the blood flow [by] generat[ing] high dimensional snapshots of brain activity every second” (Jing). The research aspect of this imaging is the top aspect expedited by artificial intelligence. Using a machine that has already been trained to understand complex data and patterns helps accelerate the research effort. The technological machine is the system decoding the patterns in brain activities which is much easier than a neuroscientist having to sit down and figure out these patterns by hand. Artificial intelligence comes with error, but there is greater error associated with human intelligence. Artificial intelligence has helped humans develop applications before seen as impractical. For example, an environment was created for humans to use a human-made lower-limb exoskeleton and have complete control over it at Korean University (Jing). This environment was made in order for professionals to able to study the different uses of this exoskeleton and how it is controlled. In order to have this exoskeleton function, users have to focus their attention by continuously staring at blinking lights. The results from this exoskeleton experiment are transported to a technological source, an electroencephalogram, or EEG cap, and then interpreted to help professionals see the brain waves associated with such actions (de Looper).

A way that neuroscience helps to accelerate artificial intelligence is that neural networks are built by mimicking brain structure.  Neuroscience played a big role in the development of the neural networks of computer systems known today. In order to develop these neural networks in computer systems, professionals used the structure of the human brain. As previously spoken upon, one human brain consists of nearly 86 billion neurons, each of which connect to other neurons to complete simple tasks in everyday life. Similar to the human brain, “the machine learning neural network also consists of interconnected neurons. When a neuron receives inputs, it gets activated and it sends information to other neurons” (Savage).  When we learn something new, we allow the connection between the neurons to strengthen and create more connections hence the fact of becoming better at a task when practicing it for longer periods of time over and over. The plasticity in our brain allows for this and for us to expand our knowledge and become better and better. “Similarly, a neural network learns when we feed it with lots of data. Each connection on the neural network is associated with a weight that dictates the importance between neurons. During the training process, the weights are tuned accordingly to strengthen or weaken the connection between neurons” (Savage). Feeding a computer system more information allows for it to become better and expand its knowledge. For example, we are able to recognize a dog as a dog because we have seen many pictures of one or have seen one many of times, likewise, when these neural networks see enough dog images, they will begin to understand and process that it is a dog. When a computer system or any type of artificial intelligence continually receives input of complex data, it learns how to process it, so it is able to receive even more complex data. Artificial intelligence is made to be able to process complex bits of data in order for humans to be able to study it. This is one of the reasons why we trust computers to give us information we do not know. We rely on artificial intelligence to help us expand our knowledge when in fact, it received its structure from our human brain (Jing).

The human brain is a large inspiration for building human-like artificial intelligence. One example known to many is the Tesla self-driving cars. These cars are built to drive on roadways with other moving vehicles solely on the basis of the computer system built within it. These cars function on their own without any human help (Piper). In order for a car to function, there needs to be a person behind it “telling” it what to do. A car simply cannot just be put on a road and be expected to drive without causing havoc and danger because a car cannot think, it does not have a brain. The capability of the Tesla vehicles mimics the thinking and reasoning of the human brain in a normal car. The AI system within the car is the human brain, the reasoning and thinking of the car (Jing). Another example, most likely less known, is something called Deep Blue. Deep Blue “was programmed to solve the complex, strategic game of chess, so it enabled researchers to explore and understand the limits of massively parallel processing (“Deep Blue”). Deep Blue was built to mimic the thinking patterns of the human brain, but more quickly and efficiently. Similar to the Tesla cars, the artificial intelligence of this robot is the brain of it. The AI system was based off of capabilities and functions of the human brain like thinking and processing. Without the human brain, there would not be a basis on how to program these artificial intelligence systems because the human brain is the only thing out there that can explain, understand, learn, process, and think in order to accommodate to ever changing situations (Jing).

In conclusion, artificial intelligence and neuroscience help drive each other forward as the world progresses and becomes more complex. Much of the connections between neuroscience and artificial intelligence are built upon each other. Neural networks are systems so similar, but yet so different when put into aspects of their own nature. Although, they come together to help build upon each subject. Artificial intelligence and neuroscience are both complex subjects alone but help make each other a bit less complicated. If it were not for one another, some creations might have not been possible. Different process show how two unrelated subjects can come together in benefit of the world around them. When brought together they bring upon many advances to humankind like advances in self-driving cars, detections of cancer, chess playing supercomputers, and many more creations to come. These developments and creations are just the firsts of their kind. These two subjects do not have many practicing in the fields, so as the world becomes more familiar with artificial intelligence and neuroscience, an abundance of more developments will come. When these two fields come together, the possibilities are endless.