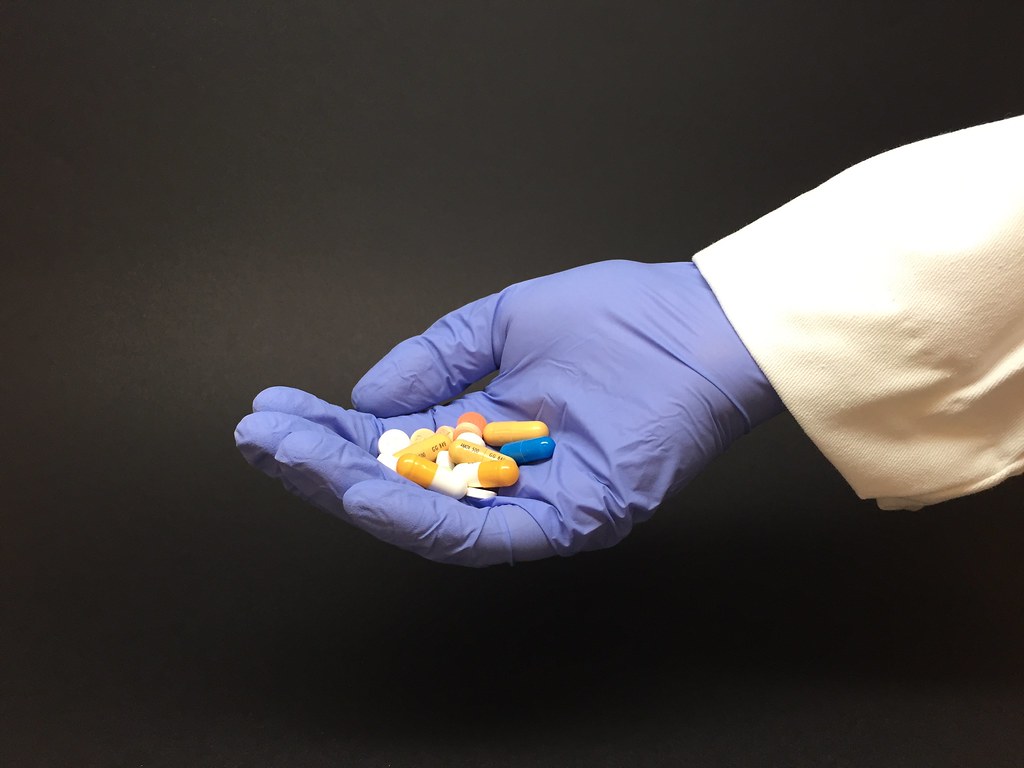 “Assorted Medications” by NIAID is licensed under CC BY 2.0

“It needs to be tested,” Nathan whispered under his breath.

He confronts one of his classmates, Brian. Nathan is extremely scared, worried and anxious when he asks Brian to help him with an experiment. Brian, just like Nathan, is a Junior at Columbia University. However, Brian’s parents are harsh, they force him to do anything and everything they seem fit. For example, he was never allowed out of the house and was always told to study, otherwise, he’d be a failure and never make it in the “real world.” His parents taught him that love was a hoax, and it should never be said when spending time with friends and especially with other girls, they wanted nothing to get in the way of their son’s future. Meanwhile, Brian was fascinated with cars and wanted to become a mechanic. It was his dream to wake up and get his hands dirty with grease and oil from old rustic and vintage cars. He wanted this more than practically anything, but his parents were convinced that he was fit to be a surgeon. Working on cars was for the ignorant and uneducated his parents thought.

Ultimately, this hard and strict parenting came with an enormous downside. Brian was never taught how to use his own judgment because his parents always decided everything for him. Once he got to college, Brian experienced freedom for the first time in his life. He partied and drank constantly, becoming a college druggy and although his grades were still decent he cheated his entire way through Freshmen, sophomore, and Junior year.

“Now why would I want to help you with your dumb experiment?” Brian asks with a confused look.

Nathan replies, “I’ll pay you, bro, fifty bucks. All you have to do is just swallow this pill.” Reaching into his right pocket Nathan pulls out a small orange pill in his right hand, “I’ll also have to run some tests too. Ya know just to make sure it works and stuff”

“What will this little pill do?”

Nathan knowing he’ll have to give a reasonably elementary explanation says, “It’s basically like a really strong muscle relaxer, but this one also helps alleviate mental pain, or at least it should.”

Brain with his experience of past exposure to several drugs replies, “Oh! Like some perc?”

Brian was in! And the testing started on the following Thursday. Nathan examined him and found that Brain had recently sprained his ankle at a party after drunkenly jumping off of a roof! Also, he hated his dad who would always beat him if his grades were not outstanding, if he talked back, or asked to date. The beatings were violent and Brian felt that they were blown out of proportion considering some of the things that his dad punished him for. He explained how if he wanted to go hang out with friends his dad’s first answer was his final answer. There was no room for negotiation and if he even tried to convince his dad or ask more than twice he would be beaten.

“Can you explain what he would do?” Nathan asked?

“He would hang me. Most parents would get a belt and whip their child, mine would actually wrap my throat around a tough line of rope and fucking hang me!” He was furious, he remembered his basement, the chart, the rope hung from the wooden beams on the ceiling, and the bucket his dad would kick out from underneath his feet “My dad would stand there and watch me gasp for air with his stupid stop-watch in his left hand, waiting for his punishment to be over.” He continued, “we had a chart in our unfinished basement, on one side was a list of punishments, and on the other was a corresponding time. For example, If my dad saw me watching dumb mechanic videos on YouTube, the punishment was sixty-three whole seconds. Try holding your breath for that long! I dare you! Try! It was horrible! There were times when I thought my neck was just going to snap before the time even ended.  The saddest part was that I wanted it too, I didn’t want to live.  I didn’t see the point of living and making all this dumb money as a surgeon if I hated my life. It made no sense to me. I would have much rather been broke and happy than rich and miserable. And my mom did nothing, she was afraid of it happening to her too.”

Nathan took a deep breath and handed Brian the small orange pill, “I think it’s time for you to take this. All of your pain will go away for the next 168 hours, you’ll finally be free.”

Brian examined the pill and noticed a small print, “What does P.F. mean?”

“I really hope this works bro” he swallowed the pill.

Once the chip is ingested it reacts with acid from one’s stomach and breaks down into microscopic AI computer cells. They make their way to your spinal cord and brain, then they latch on. Only after all of the bugs are in their correct location can Project Freedom begin. It starts by blocking all A-delta fibres and C fibres from functioning correctly. This prevents almost all physical pain from registering in one’s nervous system. Then, 3 minutes after consumption the AI bugs begin to download painful memories from the host’s brain.  Essentially taking one file and moving it into another, in this case, from the host’s brain into the microscopic AI cells.

It is a miraculous concept that Nathan has been keeping to himself in hopes that one day his work will make him very successful and wealthy. Nathan dreamt of being included in future science textbooks, right next to Tesla,  Newton, and Wright brothers. Nevertheless, he was still interested in making a fortune during the process.

After a worrisome 5 minutes had passed Nathan started to question Brian again. It worked! Brian’s pain from his sprained ankle had vanished. The aches and frequent joint pains were gone. His recollection of his abusive father had disappeared. His mind was free from all physical and mental pain. The AI is smart enough to still allow Brian to have a sense of touch but yet not go through any pains and aches. It can analyze millions of memories and decipher the painful ones. Once stored away, the AI cells can hold unpleasant thoughts or up to a week. After, everything gets returned back to the brain and the AI harmlessly detaches. Then the AI cells begin apoptosis and self-destruct. Project Freedom allows one to take a break from all of the pains of the world and temporarily relieve the human mind. “Your Brain Needs Rest”, was going to be Nathan’s pitch. Project Freedom is an astonishing revelation.

Brian had never felt so happy, free, and energized before! Brian’s need to party and drink was gone. There was no need for him to smoke all of his pain away and now he could actually focus on what was important to him — cars and girls! Everyone noticed the change in Brian, he was happier, energetic, and his face was bright. The bags under his eyes were gone, the seriousness attached to Brian’s persona had vanished. His eyes had a twinkle to them that no one had ever seen before. But his days were nearing, and on the 7th day, at approximately 168 hours from the start of Project Freedom, the AI began to withdraw itself from Brian’s spinal cord and brainstem. Nathan, who had not yet finished his experiment made sure to have Brian back before the AIs began to release themselves. As long as everything seemed okay, Nathan promised to let Brian go as soon as he could.

It was Thursday at 4:00pm and the drug should begin wearing off in two minutes.

“I forgot about how much this dumb ankle hurts!” They both laughed.

Besides all the return of aches and pains, Brian seemed normal until about 4:03pm. Suddenly, Brian’s body was in shock and he began to shake rapidly and violently. It was a seizure. Nathan did not know what to do. All of the harmful memories that the AI took out of Brian’s brain started to re-enter. All at once, every sad moment, every tear, every scrape, every fall, every utterly frustrating second you’ve had during your entire life hits you like a giant wrecking ball, as if it was your first time experiencing years of life’s pain and anguish all in one single moment. Overloaded with pain from being hung, gasping for air and 22 years of built-up hate towards his dad hit Brian all within a matter of seconds. Nathan has to do something quickly, otherwise, Brian will die due to an overload in pain. Nathan frantically thinks of a way to relieve the pain as Brian shakes violently onto the floor. He doesn’t know of any medicine that will stop this pain, except for the one that started his seizure in the first place. Nathan quickly grabs another orange pill from his drawer and forces it down Brian’s mouth. After three more minutes of trembling, yelling, and unbearable pain Brian stops and falls into a deep sleep. Nathan notices his heartbeat is out of control as it bangs against the inside of his chest.   He checks for a pause and lies on the floor beside Brian in tears. He could not believe what he had done to him. Four hours pass, Brain awakes and he has very little memory of what had just occurred. Partly, because the memories are now back into another set of AI cells.

Nathan says, “Something went wrong Brian, I had to give you another pill”

“Thank goodness! I didn’t want to return back to my old self! You can fix it though, right?”

As confident as his response was Nathan knew it was a huge task. For the next 6 days, he frantically looked for any solution possible. He ran through all potential scenarios for hours and hours a day, and he doesn’t figure out a way to prevent the memories from hurting when they re-enter his brain. Ultimately, the failed scientist and engineer gives in. With tears falling off of his cheeks sits parallel to his desktop and alters the programming of the AI cells. The new code is designed to keep all of the memories and self-destruct without inserting them back into the host’s brain. Nathan is devastated. He feels like he failed his friend Brian. He feels awful, but unfortunately when technology is unregulated events like this are inevitable. Even the worst memories still hold value in society. They form and shape humans into the unique individuals they are. Nathan’s stomach turns, he feels broken.

On the following Thursday, Nathan starts to tear as he hands Brian a small blue pill.

“Why is this one blue?” Brian asks.

Nathan clears his throat, “I had to make a few changes,” struggling to get his words out.

Brian consumes the pill, and Nathan understands that it is over. Any or all memories that the AI considers harmful are gone. The name of his dad. Constantly falling off of his bicycle when he was younger. Getting yelled at for eating too many ice-pops. Brian, won’t remember being at his grandmother’s funeral or where she was buried. All of the painful yet beautiful memories will be gone forever in less than 168 hours. What would you do, if you only had less than a week left before all of your “painful” memories were gone… forever?