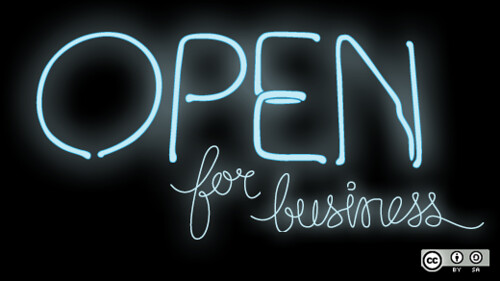 “Building an open source business” by opensource.com is licensed under CC BY-SA 2.0

Technology was first created to make life easier. Over the years, people have craved a way to keep records and data in an easier and more convenient way. Technology evolved when the world found they had a need during wartime. Something was needed that could make calculations fast, and keep the records for a later date. The first major breakthrough was the first computer, although many argue that it is hard to say what the first computer was. Each was different but they all built on one another. This was the beginning of a wave of companies that wanted to give the people of the world these new technologies. These companies even started creating bigger and better models of the first computer, making it possible for everyone to have personal computers of their own. After the internet, the technological possibilities became endless. It was found that there is always a way to make  computers and other smart devices better and more reliable. There have been many competitors over the years to be the top dog of technology. One of the big companies that has made a huge impact on the technological world would be Apple Inc. It can be argued that, Apple Inc. is a major example of how technology will continue to improve, and how it has surpassed the technology of the past.

Computers of the past are very important. They seem to be overlooked because the technology we have now is so complex and can do almost everything at just the touch of our fingertips. This is because without the first computer, we would not be even close to the technology we have now. For example, home computers, laptops, tablets and even smart phones were not even thoughts in anyone’s minds when computers were first invented. There were many different models that were made by many different people. Although, all of these models helped people understand how the final product could be made. One example of an early computer was the large ENIAC machine. This machine was an all-electronic calculating machine that was used by the U.S Army. The ENIAC was built during 1943 and 1945. This “computer” was used to calculate wartime ballistic tables and could also do multiplication, division and square roots (ENIAC). Most of these were created because of war. The reason for the making of these computers was unique. The computers were used to make wartime easier and to possibly get ahead of their opponents. This was a breakthrough because it was the first computer that used vacuum tubes. The vacuum tubes were used to control electric currents between electrodes. The ENIAC had about 18,000 vacuum tubes (ENIAC). As the computers evolved there was a thought that maybe computers could have personal uses. The thought was that a household could have their own computer to help them with everyday life. This could also become a reality because this computer was also cheaper than the much bulkier models. This idea was formed because of the Altair 8800. It was said, “Altair 8800 sparked the computer revolution” (The Altair). It was the first personal computer with an Intel CPU. It required manual programming every time it was used. This caused a problem to the general public because not everyone understood how this was done and it was a long process to learn how. This is when other small companies wanted to be the first to jump on the idea of creating a computer that could be available to the general public. When a small company called Apple Inc. heard this possibility they were one of the first to jump on this idea.

Companies like Apple Inc. were important to early technology because they were willing to create products that were appealing to the public, not just for the government. This technology was new and exciting; everyone wanted their hands on it. Apple Inc. was founded in 1976 and the first real computer was sold in 1980. They wanted to be the first company to give the public something that could make their lives easier and something that they could enjoy. This was important for the technology community because The Apple II was the first computer with color graphics (Apple). Although there was a commercially sold computer by IBM, the IBM 608 was the first computer sold with transistors. Transistors are a semiconductor device that amplifies electrical input. Transistors make up gates, which make up circuits, which make up electronics. This new power made the Apple II a breakthrough. It also made a lot of people very happy and the public wanted more. This is why Apple had the ideal template to create new computers and other technologies. Even though they had their breakthrough, this meant that they needed to start coming up with other ways to impress the public. Apple was also successful because they were better at the business side of running the company. The companies before could create the computer model  but did not quite understand the business behind it. “Over the course of a few years, Apple’s market share suffered slowly after its peak in 1990 and by 1996, experts believed the company to be doomed” (Apple). This is where the founder, Steve Jobs became the best leader for Apple Inc.

Apple Inc. has become one of the most popular technology companies all around the world. They created desktop computers, laptops, iPad tablets, smart phones, Air pods and much more. These technologies have made a great impact on companies around the world and in people’s personal lives. These technologies became even more valuable when they gained internet access like Wi-Fi. This gave Apple even more ideas to make technology even more important in the world that we live in. The internet makes it possible to connect people all over the world. “After more than 30 years, it is undeniable that Apple “has had a profound impact on technology, innovating and influencing not only how we use computers but the activities for which what we use them” (Apple). Like most technology companies, Apple Inc. is always trying to come up with new ideas. Since Apple is such a large company, there are billions of people who own Apple products. Recently there have been issues with Apple Inc. and if they are secure. This happened when the Apple smart phones came out with a fingerprint scanner that allowed you to unlock your phone. This made people second guess about buying Apple products because they were worried about their security. After this happened, many thought that Apple would resolve this problem, but then their next generation smart phone came out with the Face ID feature. This feature scans and remembers your face, so only you can unlock the phone. There were also allegations about a security breach and that Apple Inc. was slowing down their older iPhones. “It’s true that Apple used to slow down old iPhones.

The company admitted to it last December (2018), further fueling conspiracy theories, and was fined by Italy’s antitrust organization this week for intentionally using software updates to reduce performance”(The New iPhone). Situations like these make people second guess technology. Computers, smart phones, etc. make everyday life easier, but it can also make it more difficult. Every machine has a chance of breaking down or having issues. This is why Tech companies are always in business. They constantly try to upgrade and make new models. Sometimes this is not good for consumers because we are told that we need the newest of everything. This is because new technology equals bigger sales. There have been so many controversies about old iPhones. People claim that Apple is making the older iPhones run slower because they want customers to buy the new and improved version. Is this good business or just a scam? It is believed that technology has helped society but at some point this type of technology has been manufactured for quantity not quality.

In conclusion, the computers of the past may have been large, chunky and slow but the computers of today would not have been created without them. Companies like Apple Inc. helped the cause and created technology that people from the past could not even imagine. Apple not only created newer and faster computers, but they also were innovative in creating new ideas that would make life easier and more efficient. Unfortunately, there will always be issues with technology. This is why companies are trying harder than ever to come up with new ideas. Apple Inc. is no longer the only company that wants a piece of the technological world. Every machine has its flaws and this is sometime hard to understand for some people. Apple, to some people, is the most successful company around the world.  Maybe this is because they have contributed a lot of time and effort to the public and their need for new products. They improved not only the technology, but also good business. This is why they have continued to be one of the top tech companies of the world after so many years. The technology we have today will also continue to grow, and what we have today may seem live old and outdated in ten years’ time.

“The New IPhone Comes out Today. Is Apple Slowing down Your Old Device to Make You Buy the New One?” Accessed February 27, 2020. https://news.northeastern.edu/2018/10/26/the-new-iphone-comes-out-today-is-apple-slowing-down-your-old-device-to-make-you-buy-the-new-one/.