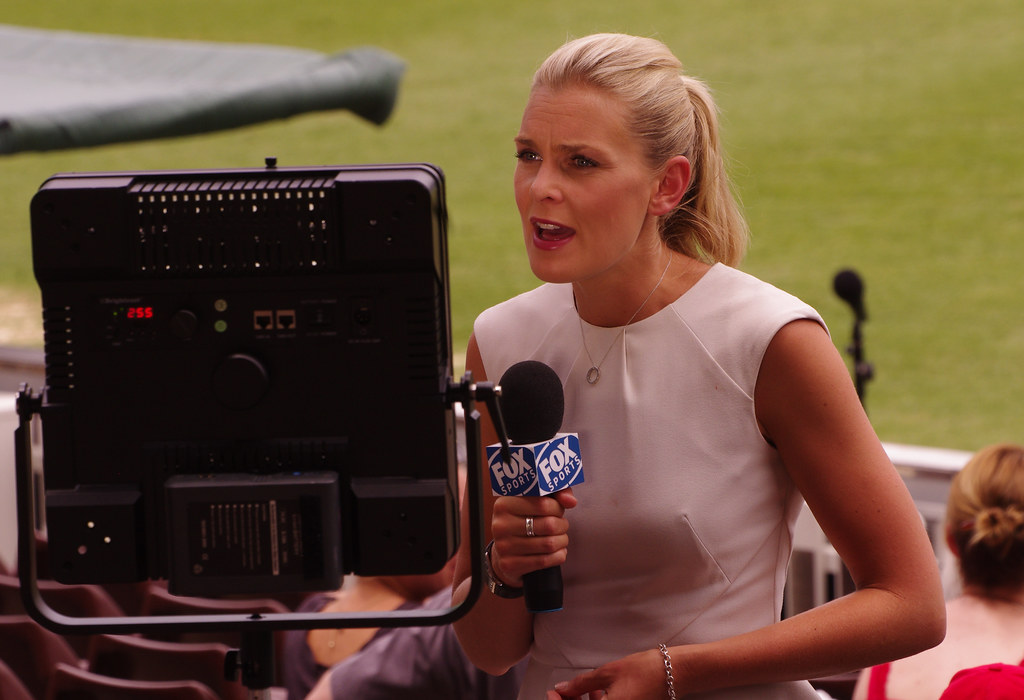 “FOX SPORTS” by NAPARAZZI is licensed under CC BY-SA 2.0

The use of technology and computer is at an all time high in the year 2020.  Each and every day improvements to technology are being developed by some of the smartest minds this world has every seen.  Technology is being implemented into many everyday activities.  It is creating new activities, such as video games, and also improving activities that have been around even since before technology existed, like sports.  Sports have been around since BC when the ancient Greeks used to hold their own Olympics.  In the United States, we have four major sports leagues that are the most popular; they are the NFL (National Football League), NBA (National Basketball Association), NHL (National Hockey League), and MLB (Major League Baseball).  When these leagues originated, there was little to no use of technology in the game.  The use of computers and technology in sports are developing and improving the four major professional sports leagues (NFL, NBA, NHL, MLB).

The NFL is perhaps the most popular professional sports leagues in the United States.  With the advancements in technology that this country has made, it is only natural for the NFL to improve the league through the use of technology.  According to the NFL Operations Referee Manual, when there is a call made by the referees on the field that could be incorrect, there is a replay review official designated to check the play.  If he decides that the refs should look into the play, they phone into the referee’s headset as call for a stoppage of game.  The on-field referees then use a Microsoft Surface Tablet to review the play.  The Microsoft Surface Tablet is a computer-tablet hybrid that can be used both with a keyboard, or as a touch only tablet.  This gives the referee on the field the ability to see the play and review it directly on the field.  Between the ref and another official monitoring from another location, they together make a decision.  With this technology the process of reviewing a play has gone from an average of 3:05 in the year 2000, to 2:01 in 2018.  Another way that the NFL has improved replay review is with the use of multiple camera angles on the field.  They have multiple cameramen located across the field at different locations, along with cameras on the goalposts, in the pylons, and on the first down markers.  This helps them to be able to see the play from multiple angles to ensure the play is correct.

The NFL also uses technology to improve treatment and help protect players from the dangers of concussions.  Concussions are a major problem in all sports, but especially in football due to the aggressive nature of the sport.  The NFL spent $60 million in 2018 to research and develop safer helmets for players to wear to limit the amount of concussions in the sport.  They have developed Zebra athlete tracker chips that monitor player’s speed, velocity, and contact levels on the field of play.  They also have impact sensors in the players helmets, where if a potentially dangerous impact occurs, the player will be removed from the field of play and analyzed by an independent neurologist, who then either clears the player to return or holds him off the field.  This is an important development for the sport due to many former players recently having CTE problems, a medical issue that develops from concussions.  If the league can continue to work with improving technology, then the sport can become much safer.

As mentioned, to help with concussions, the NFL has developed and is using Zebra athlete monitoring chips, placed in the player’s shoulder pads, to monitor the player while he is on the field of play.  Zebra has also created a chip, along with Wilson, that tracks the ball movements on the field.  This creates a new area of statistics that can be used by the league and fans to tell how fast the ball is thrown, a player moves on the field, etc.  Although this has not yet been put into action, the league hopes that eventually they can use the chips in the ball with officiating.  If this works the league thinks that they can use the ball to get an exact location of the ball when the runner is down at the end of the play.  If they time up the sensor with the instant replay, they will be able to tell the exact location of the ball at any period.  For example, they can tell if the ball has crossed the goal line at the exact time that the runner was down.  This would create a whole new era of officiating.

The NBA is another major sports league in America.  They are also the biggest league in terms of using a new technology in sports, analytics.  They have used analytics so much that almost every team has its own analytics department.  A study done at Merrimack college states “Data is collected using cameras that record every movement of both the ball and all 10 players 25 times per second” (Merrimack 1).  Teams are also using analytics to track player fatigue.  With the NBA having a rigorous 82 game regular season, teams need to make sure their players are at maximum health at all times.  Many teams actually sample their players saliva during practice to test amounts of fatigue.  They also will track each and every player’s diet to make sure they are getting the best nutrients for maximum potential on the court.   Each and every year teams are finding more and more ways to use analytics to give them an advantage.  From tracking players to find that gem in the draft to testing the best matchups in a game using analytics, the use of analytics technology is changing the game.

Another way the NBA is using technology is with virtual reality viewing of games.  While this has been slowly improving since its first use in 2014, this recent season the NBA made big steps in VR games.  The NBA had the “NBA League Pass” available for purchase, gives the user access to all NBA games.  In the 2019-20 season, anyone who purchases the league pass now has access to watch any NBA game in VR.  The VR game view puts the viewer in first row seats, and can look around like he is in the action.  The NBA has a list of compatible VR headsets, which includes most of the popular brands.

The NBA also had embraced and now uses social media to expand its brand.  Although all major sport leagues use social media, the NBA is probably the biggest promotor of social media.  The NBA uses social media to promote its games and scores.  Within a moments notice, a big play is uploaded and trending on twitter, with millions around the world watching.  This is a huge marketing advantage and attracts many new viewers.  Players also use social media to interact directly with their fans.  This can be a negative factor, with some player having arguments with fans, but frequently can be used as a positive.  Such instances include Make-a-Wish, where many children can achieve a dream of meeting their favorite player.  It is now much easier to get in contact with these players, and creates a more interactive environment with fans and players.

The NHL might be one of the latest leagues to incorporate technology, but it is becoming a big part nonetheless.  The NHL in the 2019-20 season debuted a new player and puck tracking technology.  With sensors placed in the puck, players shoulder pads, and cameras and antennas in the rafters.  This enhances at home broadcasts bringing fans interactive stats, as well as create a computerized broadcast of the game on the app.  Fans can “watch” on the mobile app where the players and the puck are moving, without having to pay for the actual broadcast.  Many fans want to watch or track NHL games, but they are not available on cable.  With the tracking device it allows fans to follow the game and see what’s happening without watching the game.

In 2015, the NHL became the first major sports league to create a partnership with GoPro.  This partnership was unique and changed the camera technology in the NHL by bringing camera angles closer to the ice than ever before.  GoPro can be clipped almost anywhere, and with the NHL partnership they took this unique way to video to a live feed, which had not been done with GoPro cameras before.  The NHL did this in an effort to try and bring fans closer to appreciate the immense and different skills that professional hockey players have.  This partnership also helped benefit the NHL with social media exposure, by including these camera angles on clips uploaded to major social media platforms.

Major League Baseball or the MLB is also a major proponent for using technology to help the game.  MLB uses something very similar to the NBA’s analytics called sabermetrics.  Sabermetrics measures different parts of a player’s game, giving the team stats to evaluate player upon that could have never done before.  One stat created by sabermetrics is called WIN (wins above replacement).  This tells teams in a single number how replaceable a single player is on the roster.  For example, below a 1 is a “scrub”, a 1-2 is a role player, a 2-3 is a solid starter, a 3-4 is a good player, a 4-5 is an all-star, a 5-6 is a superstar, and above a 6 is an MVP type player (theathletic.com).  Some other stats from sabermetrics include wOBA (weighted on base average), wRC+ (weighted runs created plus), OPS+ (on base sluggish plus), BABIP (batting average on balls in play), ISO (isolated power), and FIP (fielding independent pitching).

Another way technology has contributed to improving major league baseball is through the development and improvements to Tommy John Surgery.  Tommy John Surgery is named after a player named Thomas John who played twenty-six seasons in the MLB, and during his career injured his ulnar collateral ligament in his throwing arm.  He had the first successful surgery to allow him to make a full recovery.  Since his surgery, medical progress regarding Tommy John surgery had made drastic improvements.  Many of the improvement have not come from the surgery, but from the rehab.  Tommy John was the first surgery of the kind, so he did not know what to expect from the rehab.  Now with the use of technology and computers, many players come back stronger after the surgery.

While the use of technology and computers in sports can be beneficial in many aspects, it also can be misused.  Once case of its misuse was in the 2017-18 World Series, where the Houston Astros used illegal cameras to steal the opponents pitch signals and inform their players ahead of the pitch being thrown.  As a result the MLB suspended and fined manty of the coaches and players involved, and the Houston Astros are awaiting potential harsher punishment.  This scandal proves as an example that while technology can be used for many benefits in the major league sports community, it also can be used in a negative way.

subjects, Rick Maese closeRick MaeseReporter covering a variety of, et al. “NBA Twitter: A Sports Bar That Doesn’t Close, Where the Stars Pull up a Seat next to You.” Washington Post, https://www.washingtonpost.com/news/sports/wp/2018/05/31/nba-twitter-a-sports-bar-that-doesnt-close-where-the-stars-pull-up-a-seat-next-to-you/. Accessed 27 Feb. 2020.