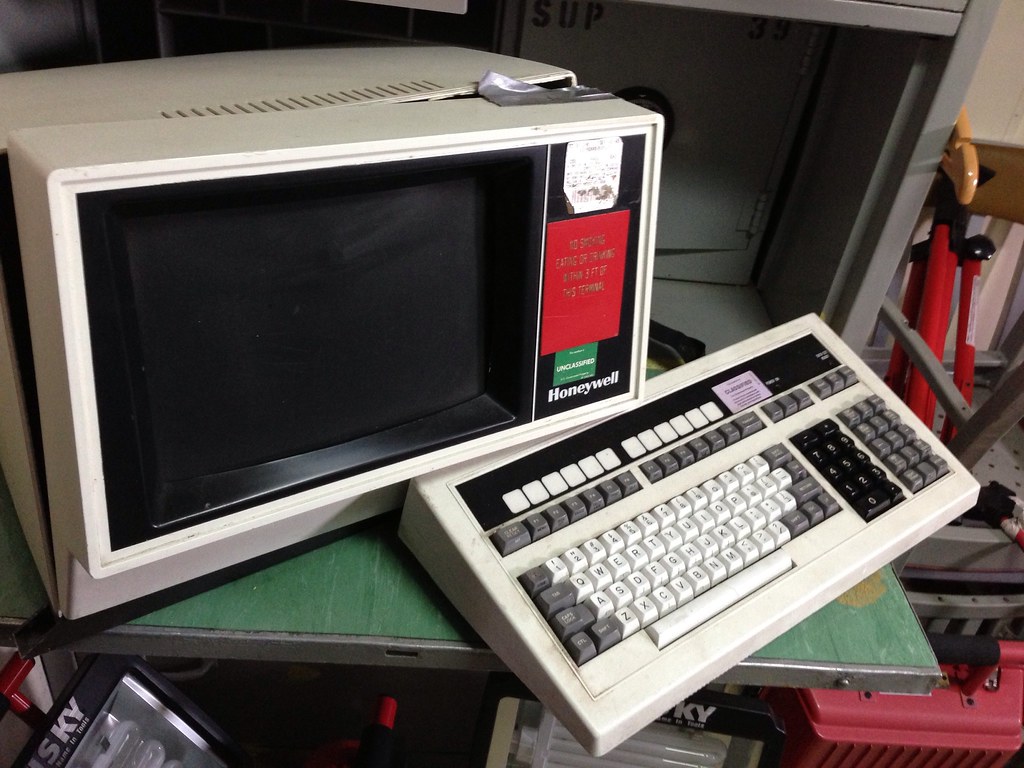 “I forgot they even made computers” by joannapoe is licensed under CC BY-SA 2.0

Computers have evolved drastically since they first came out. Starting off as being the size of an entire room in the 1930’s, to being able to fit in someone’s pocket or on someone’s wrist today, computers have had a major physical change throughout the years. Computers started off being used for mostly businesses because they were pricy and very large, but now almost every household has at least one type of computer whether it be a desktop, laptop, or even a smartphone. Computers can be used for just about anything, from facetiming someone that lives 40 miles away, to reading the latest celebrity gossip in People Magazine.

No matter what type of computer someone has, they all function in the same way. They input information, process and store that data, and they output information. For example, typing something on the keyboard would be the input, if someone saves a document to their computer that would be storage, and searching a question on Google would result in an output of answer. Some of the important parts of a computer are the central processing unit, hardware, software, RAM, the power supply, and the graphics processing unit.

The central processing unit of a computer is the part that processes instructions and runs the operating system and applications. It then processes whatever data that was inputted, and it produces an output, which could be stored by the application or displayed on the screen of the computer (Christensson, P). The hardware of a computer is everything physical that someone can see on a computer. For example, the keyboard, mouse, and monitor of a desktop computer are all components of the hardware of that specific computer. Software, on the other hand is a program that allows a computer to do certain tasks, it must be loaded into the computer’s storage. An example of software is Firefox, which is an internet browser, that allows people to look things up on their computer. An example of memory is RAM (random access memory) , it is short term and gets deleted if the computer is shut off without properly storing the document or what is being saved (Science Daily).

The power supply, as its name sounds, provides power to the computer, the part that plugs into the wall. It allows the computer to pull electricity from the outlet and convert it from AC current, to DC current (Beal, Vangie). The graphics processing unit is the part that displays pictures or animations on the screen, it renders images and videos and it is located in a chipset on the motherboard of the computer next to the central processing unit (PCMAG).

Also, in 1970, IBM’s System 370 was the first computer to use semiconductor memory, which conducts current sometimes but not all the time, and uses doped silicon (silicon with other additives to make it into a semiconductor instead of an insulator) to allow electricity to flow through it. It included 145 silicon memory chips, which replaced the magnetic core technology that was used in computers for 15 years prior to 1970 (Systems/370 Model 145).

The first microprocessor was the Intel 4004 which came out in 1971 and had 2300 transistors inside of it which are like an off/on switch that change depending on what a person is doing on the computer. Transistors replaced the vacuum tube because vacuum tubes were larger and less reliable and burn out after a period of time (Computer History Museum). The Intel 4004 was one of the smallest microprocessor designs that was ever created at its time, its circuit line was 10,000 nanometers wide. The microprocessor itself was about the size of a fingernail, and its computing power was equivalent to the power of the first computer that was built in 1946. The microprocessor allowed people to buy it and program it with the software they wanted to use, which is why it is nicknamed the “building block” (Intel).

Games on computers were around before 1972, but this year is when a very widely known and very successful game named Pong was invented. Pong was created when an entrepreneur from California named Nolan Bushnell hired an engineer named Al Alcorn to design a car-driving game. This game ultimately didn’t work out, so Alcorn came up with a virtual version of Ping Pong instead. This game is known as Pong now and it later became a very popular arcade game (Computer History Museum).

The first personal computer was the MITS Altair 8800 which came out in 1975. Most people that bought this computer bought it as a kit, which means that the company would just send the purchaser the pieces to the computer and the person would have to assemble it themselves, this was popular because it was much cheaper to buy the computer by kit rather than already assembled. When the Altair came out, it was $297 or $$395 with a case. Very shortly after the Altair came out, the next personal computer called the IMSAI 8080 came out, which is known as the Altair clone since they both run on the Intel 8080 central processing unit (Personal Computer History).

Tandem Computers released their Tandem-16 in 1975, which was designed to do online transaction processing. It also was one of the first commercial fault-tolerating computers, which means that the computer could continue to work non-stop when a hardware failure occurs. It’s able to do this because it had multiple of each critical component that a computer would need, such as central processing units, memories, power supplies, and disks. The Tandem-16 eventually led to the use of Non-Stop series of systems, which were used for ATM’s and monitoring stock trades (Computer History Museum).

In 1976, Steve Jobs, Steve Wozniak, and Ron Wayne created the Apple I. Steve Wozniak was in charge of building the circuit-board, Ron Wayne wrong the operation manual that came with the computer, and Steve Jobs was the advertiser. The owner of the Byte Shop (a computer store chain in the 70’s) told the men that he would but 50 of their computers fully assembled at $500 a piece. The three men and two of their friends assembled the 50 computers for the Byte Shop and sold them to the owner (Apple Museum). The Apple I was their only kit computer, which the buyer had to add the keyboard, power supply, and closure to the already assembled motherboard of the Apple I. This computer used the 6502 processor. The Apple I was originally supposed to be sold for $777 but Steve Wozniak thought that was too expensive, so they sold it for $666 (Personal Computer History).

Five years after the first microprocessor was created, Intel and Zilog came out with new microprocessors in 1976. “The Intel 8080 was five times faster than the Intel 8008 and could handle four times as many bytes, for a total of 64 kilobytes. The Zilog-80 could run all the programs that were written for the Intel 8080 and it included twice as many built in machine instructions”. (Computer History Museum). Also, in 1976, on March 26th, “Queen Elizabeth II sent out the first email, from the Royal Signals and Radar Establishment in Malvern as a part of a demonstration of networking technology” (Computer History Museum).

Apple Inc. introduced the Apple II in 1977, one year after launching the Apple I. Apple sold about 200 Apple I computers before coming out with the Apple II. The Apple II was already assembled when someone purchased it, and a couple million of them were sold between 1977 and 1993. Apple gave away thousands of these computers to schools, giving students the access to personal computers for the first time (Computer History Museum). It was the first computer that could produce color when hooked up to a television set, it also had expansion slots and floppy drive support, which means that the computer was able to store electronic data such as a computer file (Personal Computer History).

Also, in 1977, Atari released the Video Computer Game Console which later was renamed the Atari 2600.This was the first widely successful video game console, and it sold more than 20 million systems from when it was released in 1977, throughout the 80’s. When it was released it had 9 games that could be played on it in color and it was purchased at either Sears or Macy’s (AtariAge). The Video Game Console used the 8-bit MOS 6507 microprocessor and was designed to hook up to a home television set. When the most recent Atari came out, there were more than 900 game titles that were released (Computer History Museum).

Shortly after the Atari game system was released, Atari came out with two microcomputers with game capabilities called the Model 400 and Model 800. The Model 400 was designed for gaming purposes while the Model 800 was more of a home computer. Both of these computers competed with the Apple II, Commodore PET, and TRS-80. The Model 400 and Model 800 were designed to be a computer and a video game system. The creators wanted them to have better graphics and to be able to have advanced input and storage. To give the Model’s better resolution, and allow more colors to be displayed, the TIA (Television Interface Adapter) was improved (Atari Museum).

In conclusion, as stated before computers have transformed drastically even just from 1970-1979. Computers in 1970 started off as the Amdahl’s 470V/6 being 63in by 70in by 26in and in 1979 the Model 800 came out by Atari that was portable and light making it easy for people to move from room to room or even to different houses. Another aspect that has changed among computers is the price difference. The 470V/6 cost $3.75 million, making it very hard for the average person to have one, and the Apple II was listed for $1298, which made it much more affordable for more people to have. The lower cost was another reason that Apple sold so many of those computers. Computers are still changing today, 50 years after 1970 and they will continue to change as time goes on and as more advanced technology is created.

Intel. “The Story of the Intel 4004.” Intel, www.intel.com/content/www/us/en/history/

Patterson, J. R. C. (1994, December). The History of Computers During my Life. Retrieved February 18, 2020, from http://www.lighterra.com/articles/historyofcomputers/1970s.html