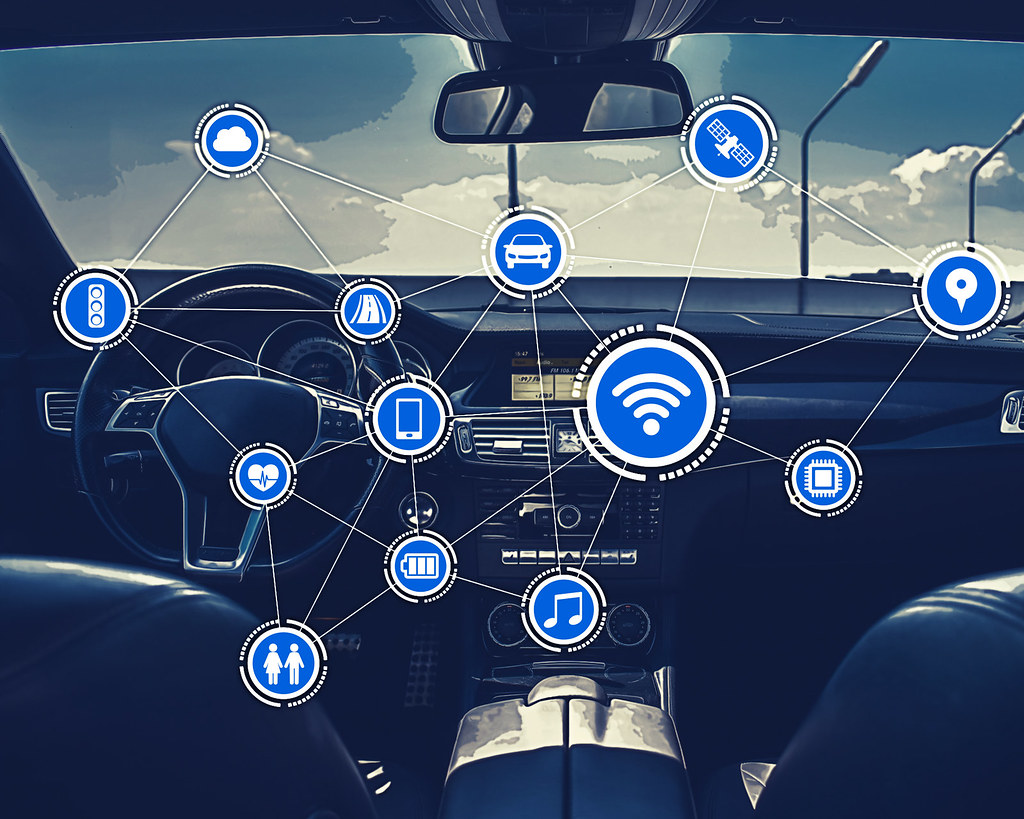 “Driverless Cars” by mikemacmarketing is licensed under CC BY 2.0

Imagine never having to drive or even having to worry about getting stuck in traffic again. Imagine being just a passenger while your car takes control of the wheel. This is the type of world many technology and car companies are envisioning when creating an autonomous, or driverless, car. A driverless car is defined as an unmanned vehicle that is capable of maneuvering without human input, but uses the support of several complicated sub-systems or devices (Koul, and Eydgahi). There are some technologies currently available commercially that creators of driverless technology are attempting to build upon such as collision avoidance systems, park assist, adaptive cruise control, and lane change assist. All of these different types of systems have helped prevent crashes and have the capability to save lives, therefore, autonomous cars and the technology used in them are able to improve safety on highways and roads.

Driverless car technology dates as far back a 1926 when Achen motors piloted a phantom car tour around the city of Milwaukee (Koul, and Eydgahi). In the 1950s, the thought of driverless cars was introduced in a magazine when a mechanic argued that reconfiguring a roadster to back into a driveway by itself would be very easy. Later that year, General Motors revealed that the company had already been investigating embedding highways with cable and radio-control boxes as a means of developing some sort of infrastructure that could support autonomous cars (Poczter, and Jankovic). After these plans were revealed, early artificial intelligence pioneers dreamed of breakthroughs that would lead automobiles into the future. In the 1980s, German pioneer Ernst Dickmanns managed to configure a Mercedes van to drive hundreds of miles on the highway by itself. Other pioneers built upon this and added their own improvements (“Where To? A History of Autonomous Vehicles- CHM”). Then in 2005, Stanley, the winning robot of Defense Advanced Research Projects Agency (DARPA) Urban Challenge, successfully completed the 150-mile obstacle course and gave much more insight into the feasibility of creating driverless car technology (Koul, and Eydaghi).

Today , there are many self-driving car features and many companies, like Google, Toyota, and Nissan, are working towards developing a fully autonomous car that utilize a wide array of technology like radar, camera, ultrasound, an radio antennas to ensure safety on the roads. . The cars use the technologies in conjunction with each other because each one gives the car a layer of autonomy to make the system more reliable (“How Do Self-Driving Cars Work?”-2020). Tesla’s autonomous cars use eight cameras that have 360-degree visibility, along with twelve ultrasonic sensors and front-facing radars to scan the vehicle’s environment for any hazards that may be present (“How Do Self-Driving Cars Work?”-2020). Google developed a car that uses a system that integrates both proprietary hardware and software by using video cameras, radar sensors, and a laser range finder to visualize traffic and detailed maps that are taken from Google Maps (Poctzer, and Jankovic). The Velodyne 64-beam laser  is mounted on top of the car to allow for real-time environmental analysis. The four radars and the  laser that are strategically placed around the car accurately generate a three-dimensional map of its environment. The cameras detect traffic lights and a GPS, wheel encoder, and an internal measurement unit controls the car’s location and logs the car’s movement (Poctzer, and Jankovic).

Mercedes Benz is currently working on a fleet of driverless vehicles based on the E-class and C-class models. The cars use internal sensors, advanced GPS, and Distronic active cruise control to guide themselves through obstacles on test tracks. Distronic active cruise control automatically accelerates, brakes, and keeps a safe distance from the car in front of you. A robotic system occupies the driver’s seat and is in charge of the steering wheel and the pedals (Poctzer, and Jankovic). However, the technology is not being considered for full integration because the officials at Mercedes believe that the driving experience of a Mercedes Benz car is crucial to the consumer choosing a high-level, luxury car  (Poctzer, and Jankovic).

Lastly, BMW announced a plan to release an autonomous vehicle that was capable of navigating normal roads, as well as highways, intersections, toll stations, and roadwork. BMW intends to develop their driver assist technology even further in hopes of creating an electronic co-pilot system. (Poctzer, and Jankovic).

Approximately 1.24 million people die globally every year as a result of car accidents, according to the World Health Organization (Poctzer, and Jankovic). The Bureau of Transportation reports that in the United States alone, an estimated 10.8 million automobile accidents with 36,000 deaths happen annually (Poctzer, and Jankovic). Furthermore, government data concluded that driver behavior or effort is a factor in 94% of all crashes (Coalition for Future Mobility). The features of self-driving cars that are available commercially have already made the roads safer by warning drivers that there is a vehicle stopped ahead, that there is debris in the middle of the road, and even breaking for the driver. Imagine a car that had all of these features and then some. For example, Google estimates that the Google Car will be able to save over 30,000 lives, prevent over 2 million injuries, and save almost $270 billion per year in the United States in total accident-related costs (Poctzer, and Jankovic). Autonomous vehicles eliminate impaired driving, drugged driving, drunk driving, and texting while driving. Elimination of these distractions and impairments make the roads much safer. Overall, it is estimated that if there is a widespread embrace of self-driving vehicles, auto accidents could  eliminate 90% in the United States alone, and prevent up to $190 billion in damages and health costs annually (“7 Benefits Of Driverless Cars”)

In the event of an accident or emergency, the use of autonomous cars will allow Americans to receive emergency medical care much faster than before. Because self-driving cars have the capability to reduce or eliminate traffic congestion from the highways, emergency vehicles will be able to reach their destinations in half the time (“How Do Self-Driving Cars Work?”). In addition to that, drivers who know they are experiencing a medical emergency may have the ability to adjust the course of their car to the nearest emergency room without having to operate the vehicle (“How Do Self-Driving Cars Work?”).

There are also numerous health benefits society could reap with the usage of driverless cars since the transport industry is thought of a health hazard.  Globally, the carbon emissions have reached an all-time high, with studies showing that these emissions have increased by over 50% in the last 30 years alone (“Are Driverless Cars A Threat Or Benefit To Society?”).  Cars with internal combustion engines produce greenhouse gases and particulates, which cause lung disease. Motor vehicles are also one of the biggest sources of carbon dioxide worldwide, which largely contributes to climate change (Innovation). Since the implementation of self-driving cars would greatly reduce the traffic larger cities experience, there are numerous health benefits that may emerge. For example, a reduction in traffic can lead to reduced cases of high blood pressure, reduced noise hearing loss, anxiety, depression, and an increase in cardiovascular fitness (“Are Driverless Cars A Threat Or Benefit To Society?”).

With any new technology, there will always be skepticism and there is some pushback against driverless car technology. There are individuals that believe that driverless cars would have difficulty functioning properly in existing cities, due to their unpredictability. Because existing cities have quirks and irregularities that are hard to map, it makes it difficult for a robot to navigate them (Duranton). Another large concern is that privacy of consumers may be breeched. Car manufacturers may find out that the information they collect from tracking the lifestyle of their customers may be more profitable than the cars themselves (Baruch).  For example, Google faced criticism from several groups about how they planned on collected data from the car’s environment. This criticism occurred because in 2007, it was revealed that Google had been secretly gathering data on personal web activity. Because of this, many consumer advocacy groups went to the California Assembly’s Transportation Committee demanding that strict privacy regulations were put in place prior to the cars being mass produced (Poctzer, and Jankovic).

Technology is never perfect and it is always subject to errors or malfunctions. This is one of the major concerns that skeptics of driverless technology have. There are a few cases that are able to back up this claim. Joshua Brown was killed when his Tesla car that was on autopilot drove into the side of a truck. The car used visible light cameras to image the road and computers to evaluate the situation. However, because the sky was bright that day and the truck was white, the two blended together and the technology was unable to recognize the difference (Baruch). There are a few other Tesla cases that are synonymous to this one. Tesla explained these crashes by saying that there are 1.25 million automotive deaths worldwide, but if you applied Tesla’s current safety level to a vehicle, it would mean about 900,000 lives were saved per year (Bailey, and Erickson).

Technology and car manufacturing companies are really looking to develop autonomous cars to lead the automotive industry into the future, and they may come sooner than expected. A widespread embrace by consumers of these cars could significantly reduce the number of fatal car accidents, save the United States billions in damages in health costs, and can even improve long-term health globally. However, there are some concerns about driverless technology. Privacy of consumers has come into question on numerous occasions. Technology malfunctions are also a cause for concern. Overall, there is substantial evidence to support the claim that driverless car technology can improve safety on our roads and highways in the United States and globally. It will take a large international movement to fully implement the usage of autonomous cars, but once the idea catches on, the world can truly turn into a safer place.

“Are Driverless Cars A Threat Or Benefit To Society?”. Machine Design, 2020 https://www.machinedesign.com/mechanical-motion-systems/article/21837400/are-driverless-cars-a-threat-or-benefit-to-society.